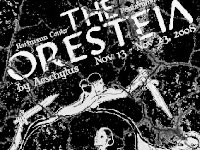 The Bradley Theatre Department’s production of “The Oresteia” finds a clever way to tell a 2,500-year-old story with a modern day twist.
Written by Aeschylus, the play starts just after the Trojan War and revolves around the cursed House of Atreus.  It begins with a son, Orestes, played by senior theatre arts major Justin Verstraete. He is having nightmares sent by Apollo, god of light (senior theatre arts major Eric Zuber) as a warning.
His returning father, King Agamemnon (also Verstraete) will be brutally murdered by his mother, Queen Clytemnestra (senior theatre arts major Sarah Duncan) and her lover, Aegistha (sophomore theatre arts major Kelly Kooken).
Apollo orders Orestes to kill his mother to avenge his father’s death. The play continues with the Trio communicating with the Chorus, which, in this play, act as members of the audience who are regular students.
The Trio explain that to win the Trojan War, Agamemnon had to sacrifice his daughter, Iphigenia (grade-school actress Callista Brown). This made him lose his humanity and turn into an animalistic war king. His wife was transformed into a grieving, vengeful woman who turns to the arms of another woman bent on revenge.
“The Oresteia” opens with a screen displaying words that the play is based on, such as racism, sexism, destruction, sin, homophobia and its main theme, justice.
Over the course of the play, the Trio talks to the Chorus and explains to them – and the audience – what has happened and how the aforementioned subject matter is still relevant today.
The set features no props, except for a big screen in the back where they show the deceased daughter, Iphigenia, when Clytemnestra remembers her or the killing of Agamemnon.
Different definitions of justice also appear which affect the ending of the play. The screen, the Trio and Chorus help the audience make sense of what is going on and connect the play to present-day issues.
For instance, there is a discussion on the Trojan War and how it affected not only Agamemnon but also the people left behind, such as his wife and children. In return,  the Chorus talks about the war going on today, one’s father in Afghanistan and how some discuss their different opinions on the war.
The Trio also claims “vengeance steals humanity,” which becomes clear as to what happens to not only the queen but to her other daughter, Elektra (sophomore theatre arts major Jerrica Thomas) who was imprisoned for bringing Iphigenia to their father. Elektra’s mother blames her for her sister’s death, and therefore so does Elektra, but she wants to punish her mother for killing her father and ignoring her for 10 years.
“I am just a corpse waiting for a grave,” Elektra says.
When she is reunited with her brother, the siblings, along with Orestes’ friend Pylades (junior theatre arts major David Alan Jackson), plan Clytemnestra and Aegistha’s murder.
The play “illuminates the [moral] questions” and leaves the audience to decide how to answer. The Greeks knew how to bring about these issues for their times and future ones as well.
For such a difficult play and story, the cast and crew found a creative and new way of representing it. The actors were passionate and convincing, and even when they use puppets for characters, they are able to show the importance of the scenes.
The cast were able to create a joke out of a serious issue so the audience can move on and pay attention to what is going on in the scene. All in all, the actors did their part to show the characters in a very relatable way for students.
Before the play began, the audience was given a flyer along with the program. It provided them with a phone number to dial that would allow them to receive texts that “try to help modernize the story and help facilitate the telling of the story.” After texting a message to this phone number, the participating members of the audience received periodic texts guiding them on what issues to think about.
The last text can best sum up what Bradley’s production of “The Oresteia” is about – “Shows over. The real world awaits.”
Grade: B+
More from VoiceMore posts in Voice »