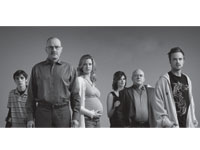 In the Hall of Gangsters, there is a pantheon of gun-toting gods. Michael Corleone, Tony Soprano, Tony Montana and Al Capone round out a group that has been immortalized by bards like Jay-Z.
But there’s a newcomer and he’s got a shaved head, Buddy Holly glasses and a handful of fulminated mercury.
“Breaking Bad” has returned for a new season, and whether viewers have watched Walt White, played by “Malcom in the Middle’s” Bryan Cranston, become a new kind of all-American gangster or have not yet been introduced to the twisted world of the methamphetamine trade, there is no better time to jump in.
Without spoiling anything, “Breaking Bad” has always been about the conflict between providing for those you love and sacrificing yourself.
Chemistry teacher Walt White began cooking meth with a burn-out former student in order to provide for his family after he was diagnosed with terminal lung cancer. However, the show quickly took a turn, showing that White’s motives may not be as relatable as initially revealed, as he begins to live out his own power fantasy.
While idolized gangster films like “The Godfather” have shown a world of respect, power and family, and movies like “Scarface” have created an environment of empty luxury for those willing to take it, “Breaking Bad” has crafted its own legend by showing a man audiences hate to love try to beat everything that has held him down.
When the bespectacled White stands in front of the hulking distributor Tuco in Season 1 and destroys his hideout with a chemical explosion, viewers can’t help but watch in awe as the stereotypical science nerd intimidates the bullies for $50,000. We can’t help but be amazed as he stares down the barrel of an assault rifle and tells his attacker he is “a degenerate piece of filth.”
For White, dealing meth is his way of being a man. After watching his colleagues surpass him, his son forget him and his wife ignore him, selling drugs, dodging gunfights and beating out the DEA are just his way of finally taking control of his life. It’s a violent revenge fantasy that could not be more satisfying.
Viewers wanted the Corleones to take over New York because it was about honor and business. Viewers wanted Tony Montana to kill a communist with a box cutter because it’s a celebration of over-the-top violence and coke-fueled abandon. Viewers want Walt White to choke someone to death with a bicycle lock because it’s a man stepping out of his shell and becoming his own kind of monster. He’s alone, hated and unbelievably satisfying to watch.
That’s not to say Walt is a great guy. He barely cares about his pregnant wife, can be dismissive to his handicapped son and is downright hateful to his partner in crime.
Even at his kindest, viewers can’t help but think about what Walt is getting out of it.
Ultimately, “Breaking Bad” is the show to watch. Walt White would tell you to “grow some f—ing balls,” but I’m just going to say to tune in.
More from VoiceMore posts in Voice »