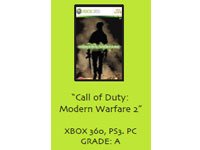 We stormed the doors. Our targets were guarded by a small group of four. They were no match for our group of 100 and counting. An appropriate name for our squad would have been Task Force 141.

We weren’t attempting to complete a military operation. We were attending one of the biggest video game events of the year, the Call of Duty: Modern Warfare 2” midnight release.

“Call of Duty: Modern Warfare 2” was released on Nov. 10 for the Xbox 360 and PlayStation 3, and video game stores across the nation stayed open until midnight to sell the game to ravenous customers.

“Modern Warfare 2” is the game fans have been waiting for since completing its predecessor, “Call of Duty 4: Modern Warfare.”

“Modern Warfare 2” addresses nearly all of the complaints from the original “Modern Warfare,” as well as those brought up by the more recent, and separately developed, “Call of Duty: World at War.”

There are now a finite number of enemies in each area, which encourages strategic, methodical play, as opposed to just running and gunning through areas and hoping that you get lucky.

Another frustration from previous games that was corrected is the grenade spamming enemies. No longer do enemies hurl grenades by the dozen.

These fixes are evidence to the amount of time Infinity Ward, “Modern Warfare 2’s” developer, spent on the enemy AI. Enemies in “Modern Warfare 2” genuinely feel dangerous and will utilize everything available to them.

When an enemy emerged from a closed door to attack, I was impressed, but when the same enemy retreated to the second floor of the same building and burst open the shutters to shoot at me, my mind was blown.

Never before have I walked through cityscapes and worried about enemy characters blasting through seemingly static doors and windows to attack.

The level design is also amazing and brilliantly stacks the odds against you. The level layout is generally in favor of the enemies, but that’s not to say the game is excessively difficult.

The above situation where an enemy burst through two seemingly static environmental pieces occurred in a Brazilian shantytown level. Enemies here were also able to run and jump from rooftop to rooftop, increasing the danger exponentially.

The storytelling mechanics for the single-player campaign were also fantastic. In one instance, after a failed escape attempt, players are tasked with escaping from pursuing enemies with no weapons, and the level ends with an epic, breathtaking jump into a flying helicopter.

And in another, my jaw literally dropped when the character you’re controlling gets shot in the face.

Multiplayer is stellar, as expected. It has all of the major features from previous games, but adds new ones as well.

With these, multiplayer feels like an overall better experience.

One of the many welcome new features is the “death streak.” If a player experiences a few unfortunate deaths in a row, he will be given a special advantage going into the next round, whether that be the weapon of the player that just killed him or increased health.

Quite simply, “Call of Duty: Modern Warfare 2” is the game to own this holiday season. It makes major improvements to an already near perfect game and revitalizes multiplayer with its new features.