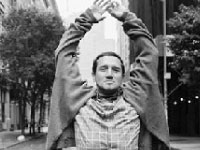 Music has the ability to capture many emotions, including anger, frustration, happiness or despair.
All good music does this by taking the listener on his or her own personal journey to the top of a mountain or into the pits of hell.
If you’re ready to take that journey, look no further. John Frusciante’s  latest, “The Empyrean,” is that album.
Frusciante’s solo career began in 1994 when he released “Niandra Lades and Usually Just a T-Shirt”.
“The Empyrean” speaks of Frusciante’s own journey. It’s a record of personal and spiritual expression, good and bad times.
But while Frusciante has lived the rock-star lifestyle, “Empyrean” is far from being a rock album.
With cryptic lyrics and distortion effects on guitars, drums, keys and strings alike, Frusciante’s sound is moody, psychedelic folk.
He blends electronics with instruments into soundscapes that can be mind-altering or familiar, but always experimental.
The ambient textures of “Before the Beginning” set the tone for the record, as Frusciante screams soulfully over echoed drums and keys with an effected-out guitar line that is reminiscent of Pink Floyd’s David Gilmour. Frusciante uses minor chords and piercing high notes to weave a wailing way through the track. The tempo is slow and sincere.
Contrasting the first instrumental track, “Song to the Siren” is a cover of the Tim Buckley song, originally written with poet Larry Beckett in the late 1960s.
This  showcases Frusciante’s talented singing abilities as he narrates a story of temptation, calling to mind themes from Greek and Roman mythology.
“Dark/Light” also starts out slowly and carefully, a sad song over quiet organs, but picks up into a bass line-driven pop song, courtesy of Red Hot Chili Peppers bandmate Flea.
For the rest of the song, the brilliant chemistry between them takes center stage.
On“Unreachable,”  Frusciante builds up into a two minute soaring guitar solo with Flea right behind him, never missing a beat on the bass.

Despite being heavy on meaning and expression, “The Empyrean” has a true musicality that can be heard on tracks such as this.
“Enough of Me” and “One More of Me” use the same chord progression and similar lyrics to suggest a theme of duality.
The former is more optimistic, with lines like “Whatever slips out of our hands / Will find its way back to us once again.”
But the latter is dark in comparison, with lyrics like “What’s gone will never come back / But it exists when you think of it / What is anything anyway / But a series of things running through your brain.”
Split by the dark, heavy song, “Central,” featuring the Sonus Quartet on strings, “Enough of Me” and “One More Of Me” say outright what the rest of the album only hints at – a sense of struggle between good and evil, heaven and hell, choice and fate.
Frusciante’s lyrics throughout “The Empyrean” play with many subtle themes, but the repeated allusions to religious images and concepts are clear on the album.
Even the album’s title pertains to Greek mythology and Christian literature alike.
With song titles such as “God,” and “Heaven,” the allusion continues. Frusciante’s lyrics on the album are introspective, existential and speak of religious paradox.
On “After the Ending,” Frusciante sings “There is nothing after the ending / Everything is eternal / Nothingness does not exist / No thing has ever become nothing.”
But, again and again, Frusciante’s solo work is his own. These words are his own personal struggles. This music is his own personal journey. We should just be glad he brought us along for the ride.
More from VoiceMore posts in Voice »