Clash of the Titans skimps on gore, clashes 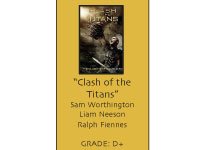 When I first heard of the remake of “Clash of the Titans,” I couldn’t help but think of endless epic gore-ensuing battles combined with a compelling back-story that ties all of the intricacies of Greek mythology with man’s waning loyalty toward them.
While the remake appears to make attempts at this endearing pedestal, it never comes close to capturing these expectations. This results in a less than mediocre action flick that is both predictable and underwhelming in almost every way.
The story starts off with the unexpected discovery of a lost child at sea, who is somehow found by a married peasant couple who take the child in as their own.
Really, this is all the initial backstory you need to know about Perseus (Sam Worthington) as the rest is quickly explained either through attempted plot twists by the villain Hades (Ralph Fiennes) or through random flashbacks. Each does a poor job of trying to make these sequences anything more than necessary to move the downtrodden plot along.
The plot itself isn’t very inspiring either, as it follows the vengeful peasant Perseus who seeks to destroy Hades because he slaughtered his family in the middle of an ongoing battle, somehow failing to kill Perseus in the process. While it is explained that Perseus is in fact a demi-god, I never understood how he earned this title in the first place.
How could a severe burn to the arm cripple him, yet he somehow manages to survive being ruthlessly devoured by a gargantuan scorpion and come out of it without a scratch?
The movie tries on multiple occasions to make Perseus seem like a humble human vocally, but in action he slaughters enemies like they were helpless rag dolls, conflicting the  character’s overall intentions.
Acting wise, no one but Liam Neeson, who plays Zeus, even comes close to a decent performance, as they are either standing around getting killed, or are attempting to be the “strong but silent type” only to be sliced in half in the next scene, which is admittedly somewhat satisfying to watch.
Hades tries to be the ultimate villain by pretending to work with his brother Zeus while attempting to become stronger by slaughtering humans at the same time.
The rest of the battles are simply child’s play at best, with the majority of them drawn out over a 15-minute period that involves more acrobatic escapes than actual combat.
What you usually get from these sequences is Perseus dashing away from his enemies for an overdue amount of time only to turn around randomly and in typical slow motion desperation, decapitates them with one sword stroke.
This is as much gory satisfaction as you’ll get from any of these scenes, making this movie more of an underwhelming wash than it already is.
Simply put, this movie has nothing to offer that you haven’t already seen before in countless other action flicks. Between its erratic and underwhelming fight sequences, its non-existent acting prowess and its undeniably predictable plot that loses steam before it even begins, this action movie isn’t worth 10 minutes of your time.
If you’re really dying to see a gory, balls-to-the-wall action-oriented film with a predictable plot, go rent “Gladiator” because I guarantee it will offer more thrills in the first scene than “Clash of the Titans” could offer in its almost two hour duration that bores you to tears.
More from VoiceMore posts in Voice »