Comedians take the stage for charity 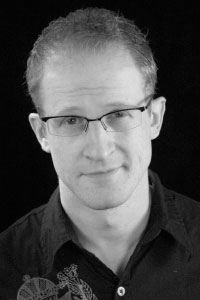 Laughter filled Neumiller Lecture Hall on Monday night as stand-up comedians Mike Trainor and Steve Hofstetter took the stage for a charity event hosted by Sigma Phi Epsilon.
The show opened with Trainor, a comic from New York and contributing editor for Collegehumor.com.
He started the night firing off jokes about alcohol, coining “Now You Drink,” a game that entails pointing at someone and telling him or her to
drink. Amusing and uncouth, Trainor made the crowd laugh almost the entire time he was on stage.
The headliner, Steve Hofstetter, was equally as insolent, if not more so. He made crudely hysterical jokes about his past experiences as a comedian, Black Friday fatalities at Wal-Mart and trips to the strip club.
The audience enjoyed Hofstetter’s shameless rants about habitual drug use and went wild when he labeled it “a cocaine crowd.”
While his unabashed wit was the highlight of the performance, Hofstetter was clearly educated and made sure his crowd knew the importance of information.
“Be proud of your intelligence,” he said. “And be honest.”
Hofstetter made the show more personal when he interacted with the crowd, asking students what kinds of strange classes they were enrolled in at one point or another.
When students answered with “STD class,” “alcohol class” and “Harry Potter class,” Hofstetter lost it.
“That’s gonna be the title of my next album, ‘STDs, Alcohol and Harry Potter’,” Hofstetter said to the audience.
Both Trainor and Hofstetter were crowd-pleasers.
“The comedians were really funny and on-point in their humor,” sophomore organizational communication major Kevin McClelland said. “They didn’t try
to be nice. They did their thing unapologetically.”
The crowd barely filled the middle section in Neumiller on Monday night, but Trainor and Hofstetter stepped it up and entertained everyone with their crude humor and hilarious disregard for vigilance.
Hofstetter, a former SigEp at Columbia University, is one of the top-booked acts on the college circuit, according to Stevehofstetter.com.
He resides in New York and has been featured on the Late Late Show with Craig Ferguson, ESPN’s Quite Frankly and New England Sports Network’s Comedy All-Stars.
“[Hofstetter] contacted us to see if we wanted him to do a show at Bradley,” said JD Blue, the vice president of programming for SigEp.
Blue said the event was planned to raise money for Camp Big Sky, a charity that provides an outlet for those with disabilities to fully enjoy the outdoors.
He said this event, along with the fraternity’s  annual “Valentine’s Valets” event, was part of SigEp’s philanthropy.
“We worked it all out and decided instead of keeping the money for our house that we would donate the money to Camp Big Sky,” he said.
Blue said Hofstetter’s show was an overall success, raising more than $1,300 for the camp.
More from VoiceMore posts in Voice »