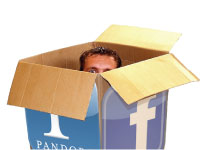 When I get bored with my iTunes (which happens a lot since I can only handle so much `90s pop), I use Pandora online, type in an artist I like and let the station run wild. Every time I listen, I learn about new bands and attempt to make my music a little cooler.
If this were 2005, I would devote this column to the awesomeness of Pandora, how new and exciting it is and how I love it way more than MySpace.
I’m not here, though, to sing my Pandora praises (which would probably sound a lot like an episode of “Glee,” since that’s my current go-to station). Instead, I need to expose the creepiness that has been going on at Pandora lately.
I had both Facebook and Pandora open once as I was attempting to do homework, and Pandora went into full-on Peeping Tom mode. With every song that came up, Pandora would tell me which one of my friends also liked that song.
That’s not even the weirdest part. Below the station player, there’s an option for friends’ music. I decided to click on it, all in the name of research, and I couldn’t believe what I was seeing.
First, I never gave Pandora access to my Facebook page, and second, some of my friends have even more embarrassing Pandora stations than I do. Andrea from high school’s most recent station was Kenny G. College has obviously been a dark time for her.
As I scrolled down the list, I realized that almost all of my Facebook friends were on there, and considering how humiliating some of their stations were, I’m sure they weren’t OK with sharing them. What you listen to when you are with your friends is one thing, but the music you jam out in your bedroom to is a different story.
The most troubling part of all of this was that I was seemingly fine with it. As stalker-ish as it may be, I couldn’t wait for the next song to come up and find out who from my past also liked it. I found myself searching through my friend list, inspecting (and judging) everything that came up on it.
It’s not something I’m particularly proud to admit, but I creeped. Hard.
Have we gotten to the point in society where mysterious, secretive online creeping is acceptable? Considering I just wrote a few paragraphs admitting my love for it, I’m going to have to say yes. Twitter is essentially a creep free-for-all and the up-and-coming FourSquare is the most invasive social media to date, where users can post and track where they’ve been during the day, even allowing the most technology-illiterate to easily follow you around.
While I don’t foresee technology downgrading anytime in the future, and for the sake of my Pandora-stalking I hope it doesn’t, it’s important for people to be aware of what they are putting out online. Even ostensibly safe information, like the fact that your most recent Pandora station was ABBA, can be found out.
More from VoiceMore posts in Voice »