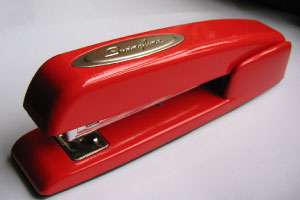 It’s been 10 years since Mike Judge’s famous film, “Office Space,” graced theaters and quickly became an American cult classic.
The “Office Space” cast reunited in Austin, Texas, this month for the 10th anniversary of the film, according to Cinematical.com. Over 1,200 fans and cast members showed up for the event.
Among the stars present were Judge, actors Stephen Root (Milton Waddams), Gary Cole (Bill Lumbergh), David Herman (Michael Bolton), Ajay Naidu (Samir Nagheenanajar), Kinna McInroe (Nina the Receptionist) and others. Ron Livingston (Peter) and Jennifer Aniston (Joanna) were not in attendance.
The crowd watched a special 10th anniversary screening of “Office Space.”
After the viewing, a Q&A session was held, according to Rolling Stone magazine.
The audience members were able to ask questions to the cast, and even asked Naidu to re-enact his breakdance from the movie. And of course, he obliged.
According to Cinematical, at the end of the night, the cast even went outside to beat the crap out of a printer with baseball bats.
Although “Office Space” was not the first film to enter into recent memory with a bitterly ironic sense of humor, it has had a larger impact on modern pop culture than any film before it.
Perhaps one thing that makes the movie such a favorite is the soundtrack.
A mix of mostly hip-hop and rap by various artists such as Geto Boys, Canibus and Scarface, the “Office Space” soundtrack fits the movie perfectly.
“This is music to hate your job by,” Judge said, according to Cduniverse.com.
There’s no better combination of songs to start out the movie than Cuban composer Perez Prado’s “Mambo #8” alongside Scarface’s hard-core rap “No Tears,” Michael Bolton’s (David Herman) infamous morning traffic anthem.
Listen to Geto Boys’ “Damn It Feels Good To Be A Gangsta” on those days where you despise your job so much, you feel like gutting a fish and tossing it on a big stack of unfinished TPS reports. The song is so laid back, it makes even the most reliable of workers want to throw in the towel.
Other songs featured on the soundtrack include Ice Cube’s “Down For Whatever,” Slum Village’s “Get Dis Money” and Lisa Stone’s cover of the Dolly Parton hit, “9 to 5.”
Too bad there isn’t actually a Michael Bolton song on the soundtrack. If only.
Although the music is memorable, “Office Space” has achieved fame through its subversive humor and satirical observations of white-collar life. This style has caught on in recent years, finding humor in the most mundane of situations.
Judge’s masterpiece paved the way for “The Office” with its sense of corporate boredom mixed with extremely sly humor.
Even more serious programs like AMC’s “Mad Men” certainly owes something to “Office Space,” showing there is most definitely drama present in even the tamest of environments.
Some of the more famous lines from the cult film have also entered the modern language. Everyone has been asked before about “having a case of the Mondays,” and many T-shirts have popped up with Milton’s famous quote, “I believe you have my stapler.”
For a film with such a large fan base, it seems very odd that so few of its stars have continued on to larger fame. Jennifer Aniston has become an A-list star, and John C. McGinley plays Dr. Cox on “Scrubs” but star Ron Livingston has done relatively little other than “Band of Brothers” and a handful of episodes of “Sex and the City.”
Director Mike Judge has continued to work on his show “King of the Hill” and has a new film slated for summer of 2009.
More from VoiceMore posts in Voice »