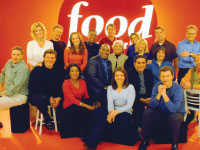 Ever since I can remember, I’ve loved food. My sister went three months without dessert when we were younger because she wouldn’t finish her dinner. I loved this, as I could not only polish off my own plate, but hers as well.
As I grew up, my palate expanded and so did my TV watching, especially under the lethal combination of competition and food, two of my favorite things.
Nowadays, whenever I’m tired of procedural reruns and ’90s comedies, I always seem to channel surf my way right to Food Network or any other station featuring some culinary concoction.
Sometimes, it depresses me. Not only are my kitchen skills sub-par, though I can make a mean grilled cheese, I never eat anything half as good as what the chefs are making.
Why do I love to food torture myself on a daily basis, subjecting myself to only visually being able to experience such deliciousness? Because food shows make for great background noise and provide for more drama than anything else on television.
Take Bravo’s culinary masterpiece, “Top Chef.” Besides the necessary fighting between the competitors, as each season casts at least one over-confident, under-qualified villain, the kitchen is like the icing on top of the cake.
The kitchen constantly adds an extra layer of suspense. Will the food get plated in time and be cooked properly? Is it really as disgusting as it looks? How can they dice the necessary ingredients after slicing their hand open? Will Padma spit out the food again?
Food Network has its own share of gastronomic games in the always-classic “Iron Chef” and newcomer “Chopped,” each putting its own exciting twists on foodie competition.
One recent “Chopped” episode had the chefs creating a dessert out of cherry tomatoes, tofu, ginger snaps and cocoa nibs. Watching chefs come up with such creative dishes out of the most random and seemingly gross ingredients is thrilling television.
Even the non-competitive culinary shows have a suspenseful edge. Every turn, bump and stop in a delivery ride on “Ace of Cakes” is nerve-racking, and as the finely detailed cakes on “Food Network Challenge” quiver as they are moved to the judging table, I do too.
As long as these networks keep serving up the drama (pun absolutely intended), I’ll keep tuning in.
More from VoiceMore posts in Voice »