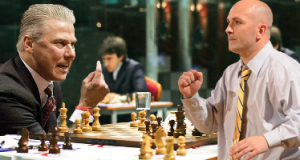 It was a battle between old versus new. The slicked back hair versus the bald guy. Jim Les faced off against Geno Ford in a chess match Wednesday to become the new women’s tennis coach.

After Scott Petersen resigned as coach, Bradley’s Director of Athletics Michael Cross decided to open a national search to find a replacement.

Instead of being forced to choose between the two, University President Joanne Glasser decided the only fair way to decide between the candidates was a classic chess match.

“Being an institution of national distinction, we are glad to bring two candidates that may not be used to winning championships but rather are just glad to be here,” Glasser said.

Les said he applied for the women’s tennis coaching position because Bradley felt more like home compared to California.

“There is no place like home,” he said. “UC Davis police tases protestors, while the police haven’t disturbed the one tent on the Olin Quad. I couldn’t pass up this opportunity.”

All 2,037 people in the crowd waited patiently for more than an hour and a half in the seats of the Renaissance Coliseum for one moment that brought everyone to their feet and erupted into cheers, booming throughout the arena.

“Knight to E-7,” Ford exclaimed as the giddy basketball coach jumped onto his chair and exalted a roar.

The win gives Ford the opportunity to coach the women’s tennis team after Petersen resigned to join the Skillz That Killz dodgeball team for the national tournament next month in Las Vegas.

“Finally,” Ford said, “I’m average height for the athletes that I will be coaching.”

Some of the women’s tennis players are thrilled that Ford was the victor.

“[Petersen] was giving advice on serving and he’s over six feet tall,” a source close to the situation told the Scout. “Finally, we’ll have a coach that can relate to our height.”

Ford was excited for his future as the women’s tennis coach.

“Even if we don’t score a point, we still have love,” he said. “When I found out that you only need four points to win a game in tennis, I knew this was the right position for me.”