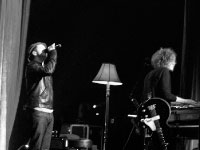 It started with gay porn on the drum-set and condoms on the microphones, and the pranks didn’t stop there.
Wednesday’s OneRepublic concert, featuring Augustana, The Spill Canvas and The Hush Sound, seemed just as much like a bunch of friends joking around together on stage as it was a display of musical talent.
But witnessing the musicians truly enjoy their art added a special essence, reminding listeners what concerts are supposed to be for in the first place.
Those who knew nothing about OneRepublic aside from seeing its name next to Timbaland’s or taking a glimpse at ads for the concert around campus, in which members were decked out in what looked to be high-designer fashion, had to have been surprised when all members came out and looked as if they were suffering from bad hangovers.
Even though their songs are amphitheater-friendly, the members of OneRepublic look nothing like rock stars. A fe w were in dire need of haircuts and some looked as if they’d been wearing the same shirts throughout the whole tour without having done laundry.
Although popular-radio generally isn’t associated with musical talent, OneRepublic proved to be an exception.
Three members played multiple instruments, one rocking the cello.
Although OneRepublic was headlining, few attendees seemed to know the band’s entire album. However, its popularity from last year’s hit, “Apologize,” proved to be enough to keep the crowd in the band’s hands.
Claps and earplug-worthy screams followed each song, but during most of the actual music the audience sat lifeless and cross-armed. The crowd was almost robotic in its pattern of resting and cheering, systematically pretending they enjoyed each song a little more than they did.
Frontman Ryan Tedder’s wit seemed to assist this, as at times people were more engaged in his talking than singing.
Not to belittle the ability of Tedder’s pipes – his strong range and unique sound make the band worthy of the Grammy nod a crew member told the band it received on stage, before they all popped champagne to celebrate. Guess no one told them about the new policy which prohibits alcohol at school-sponsored events.
A highlight from the set was when the band played a song it recently wrote for its new album, which showed the band will be in the music scene time enough for at least one more hit single.
As it was The Hush Sound’s last night to play on Tag This Tour, each band gave a special tribute to the Chicago natives.
Although Hush had a strong stage presence and was equipped with enough clever anecdotes to last the whole night, it was a bit of a relief when its whining singers and dizzying piano left the stage.
The Spill Canvas put forth a strong performance, showcasing most of its best songs, about half of which came from its newest album.
Frontman Nick Thomas’s leg thrusts were somewhat discomforting, especially since they had nothing to do with the band’s emo-rock anthems most of the time.
Thomas simultaneously won over the audience and let everyone know what was on his mind as he introduced “Connect the Dots.”
“This song is for those of you people who enjoy getting intimate with other people,” he said. “And for those of you who are celibate – my apologies.”
The weirdest frontman scenario of the night, however, was Augustana’s Dan Layus who finished the band’s set lying on the floor, after whispering in the microphone and impersonating a girl breaking up with her boyfriend during a cover song.
Most seemed to suspect Layus to be on some form of drug, and a lot of it, as he shook his hands uncontrollably throughout the band’s set.
However, Augustana fans know Layus is a passionate performer. And while something may have entered his system before he hit the stage, many of his actions weren’t uncharacteristic.
The band played all of its best including “Boston,” “Sweet and Low” and “Stars and Boulevards.” Because of its low-tempo and relaxed vibe, Augustana may have been the least well-received, but also seemed to be the most musically inclined.
The Civic Center T heater proved to be a great place to hold a show, with a steady incline up the main floor and well-placed balconies making any seat in the house a great one.
Tedder even expressed his love for the venue, as he could not stop looking around and calling it “bada–.”
Set changes were short and students got to enjoy four hours of music – maybe not four full hours because each act brought with it more than the music – but that’s the perk of a live show.
More from VoiceMore posts in Voice »