From the Couch: “Call of Duty: Modern Warfare 2” 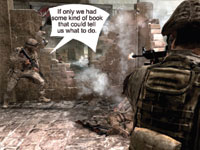 Every day, I’m reminded that I’m not a very good dude.
I know nothing about sports, cars or the show “Entourage.” I would rather watch a “Top Chef” finale than the Super Bowl. The most manly movie I own is “Fight Club,” which author Chuck Palahniuk once claimed was about male bath houses. I hate “The Boondock Saints.” I own a Britney Spears album.
So it should come as no surprise that I have no idea what is going on in “Call of Duty: Modern Warfare 2.”
“Call of Duty: Modern Warfare 2” is right-wing propaganda porn that makes most men salivate quicker than a 13-year-old girl watching a Jonas brother take off a purity ring. It became the fastest-selling video game ever the day of its release, and I have a hard time talking to some guys without it coming up.
After about two weeks playing the game, I’m still mostly baffled. The story is about 90 percent “Red Dawn” with a touch of “Hot Fuzz,” but most gamers only picked up the disc for the multiplayer.
The game comes alive online. Twelve people pick up fire arms and go at each other in urban hell-scapes. I would say it was brainless if it wasn’t so unbelievably entertaining.
For the most part, the online game is a straight shooter, but players level up to earn experience, giving them new weapons and equipment.
It’s like Pokemon, if Pikachu had an M16 and could yell homosexual slurs at you over voice-chat.
Even with all that, I still think it’s inexplicably weird.
I just don’t get it. There’s no sense of accomplishment, betterment or control. I’m going to watch “Rachel Getting Married” and think about Mandy Moore’s ’90s pop career instead.
More from VoiceMore posts in Voice »