From the Couch: “Top Chef Masters” 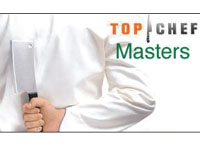 Though other shows quench my need for foodie competition, I’ve been craving some “Top Chef.” And luckily, Bravo is fulfilling my wish.
“Top Chef Masters” started this week, and while it’s not as strong as the original “Top Chef,” it’s better than most of the reality shows on TV. Comparing it to the original seems immoral, as the main components of its predecessor have been stripped away and changed, though it still has a spicy flavor.
Part of the appeal of “Top Chef” is seeing fledging chefs come into their own, garner some respect and fight with each other. Every time they stepped into the kitchen, there was always the underlying chance of someone getting stabbed, tripped or burned.
With “Masters,” petty drama is replaced with overwhelming respect.
While it is nice to see competing culinary geniuses show genuine admiration for one another, it can sometimes get tedious, leaving me yearning for a good, old-fashioned screaming match.
There’s also no Padma, Tom Colicchio and Gail Simmons, the heart and soul of the judging table. The new critics are slightly less affable but more judgmental, making the judging round still entertaining.
In each quick-fire challenge and elimination round, the chefs are awarded stars, just like a restaurant rating system, and the chef with the most stars at the end of both rounds wins.
Nonetheless, watching renowned chefs struggle to complete challenges their less-developed counterparts dominated is certainly a pleasure. Some of the chef-testants have previously served as guest judges on “Top Chef,” and it’s interesting to see the roles reversed.
The chefs on “Top Chef Masters” are all well off, running their own restaurants and dominating the culinary world. Instead of rewarding the chefs with a cash prize, each chef donates their winnings to a charity.
Unlike most selfish, greedy reality shows, it’s good to see contestants being so charitable.
Overall, “Top Chef Masters” is worth checking out. While the drama may be lacking, staring at the gastronomic masterpieces created every challenge certainly makes up for it.
More from VoiceMore posts in Voice »