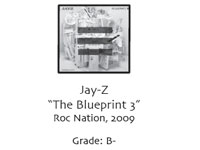 Jay-Z is probably your favorite rapper’s favorite rapper, and with his 11th No. 1 album, released Sept. 11, it’s obvious why.
“The Blueprint 3,” is the Brooklyn rapper’s most ambitious project, with ’70s samples and bass-synth dance tracks finding a home on the same record.
But as his early street life inspired albums become less relevant to the multi-platinum entrepreneur, Jay-Z struggles to find a balance between hip-hop and poppy mainstream rap.
The singles on the album are familiar. “Run This Town,” featuring Rihanna and Kanye West was released in July, but apart from the Kanye-produced beat, the song falls short. Jay doesn’t seem at home on the track.
His lyrics seem uninspired, and he’s outshined by Rihanna’s vocals and Kanye’s catchy feature verse, who boasts, “We give a damn about the drama that you do bring / I’m just tryin’ to change the color on your mood ring.”
“D.O.A. [Death of Auto- Tune],” is a track that has also received a lot of radio play since it was released in June. The No-ID-produced beat includes a whiny electric guitar riff and a piercing oboe sample that pushes the borders of mainstream rap beats.
Jay-Z’s flow works with the beat, and his lyrics call out other rappers (“I just don’t need nobody to smile on this / you rappers singin’ too much / Get back to rap / you T-Pain’n too much.”)
But “The Blueprint 3” has been hit or miss for many dedicated Jay-Z fans. The variety of music Hova displays comes across as scattered, and even
though he features new-school rappers like Drake (“Off That”) and Kid Cudi (“Already Home”) neither gets a verse on their track.
Jay-Z also toys with some dance tracks, but the effect is awkward. “Reminder,” produced by Timbaland, sounds like a B. Spears cut.
“Off To The Next One,” produced by Swizz Beatz, features a sample from “D.A.N.C.E.” by the French electronic duo Justice.
These tracks feel like they belong on a Black Eyed Peas album. It just ain’t Jigga.
There are, however, a couple gems on “The Blueprint 3.”
“Empire State of Mind,” featuring Alicia Keys, has Jay-Z reminiscing about his hometown with the enthusiasm and swagger of his “Reasonable Doubt” days (“me I’m up at Bed Stuy, home of that boy Biggie / Now I live on billboard, and I brought my boys with me.”) It’s a real feel-good track. Alicia Keys plays a bright piano melody, and soars over the hook. Still, we’ve heard it before from Jay-Z.
“So Ambitious,” produced by the Neptunes, is another refreshing change from the dance tracks. Featuring Pharrell Williams on the hook, and displaying his and partner Chad Hugo’s musical genius, this beat has it all.
Wavering h o r n s sound off, keys and v i b e s a c c e n t d o w n b e a t s backed by bomb a s t i c d r u m s . And Hova dominates on the track, rapping, “so with or without any of your involvement / we coming for all of this, respect my conglomerate / I went from p a u p e r to the president / cause every deal I ever made set precedent.”
Both “Thank You,” and the Kid Cudi feature, “Already Home,” include beats with horns-and-strings rhythms that Jay-Z seems to vibe with lyrically. His lyrics on “Thank You,” are perhaps the best on the album (“No no don’t thank me, This is just how my suit is stitched / I’m cut from a different cloth, I’m just who the shoe fits.”)
“Young Forever,” featuring Mr. Hudson from Kanye’s G.O.O.D. Music Records, is my new guilty pleasure. It’s the least hip-hop song on the album, sounding more like “Friends Forever,” from Vitamin C (your graduation song) but Hov’s flow works.
Jay has tried to communicate what success has done for him, but in past attempts (“Beach Chair”) he’s failed.
Ever since the beginning, Jay- Z’s lyrics have been about his career, at first trying to make it to the top, but now that he’s there, does he have anything else to offer to the rap game? Jay-Z said it in “Say Hello,” “I got my mind on my money, money on my mind.”
But apparently, not much else.
“The Blueprint 3” is not another classic from one of rap’s greatest, but it’s a good album. This album is for true heads, for beat junkies and with a little patience and few plays, real Jay-Z fans. “The Blueprint 3,” is a worthy addition to the rapper’s impressive catalogue. It will get you moving and get you thinking, which is really what hip-hop is all about.
More from VoiceMore posts in Voice »