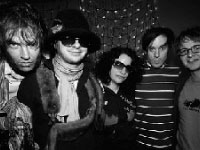 Hunter S. Thompson once said, “When the going gets weird, the weird go pro.”
This is good news for Of Montreal but much worse news for fans.
Indie pop act Of Montreal, led by lead singer Kevin Barnes, released its ninth studio album “Skeletal Lamping” on Oct. 21.
For those expecting a follow-up to their 2007 album “Hissing Fauna, Are You the Destroyer?,” sheer disappointment is coming.
Let that sink in. “Skeletal Lamping” is not “Hissing Fauna.”
Fans regard the poppy up-beat brooding of the earlier album as Barnes’ masterpiece, however “Skeletal Lamping” shows his willingness to experiment in new forms and styles. Where “Hissing Fauna” followed a tight pattern, the newest work is a sampler of all manner of sounds and styles, some coming out more successful than others.
Ultimately, “Skeletal Lamping” is a departure and a throwback. The main focus of the song writing is a character known as Georgie Fruit. He floats through the record, exposing taboos and exploring the sexual identity Barnes has so often toyed with.
Although this theme is in a decidedly ’70s rock style, “Skeletal Lamping” bears no real resemblance to the works of the past. Barnes explores R&B as well as a bizarre twist on pseudo-rap with the disc, clearly placing it as modern art-rock. These traits place it far away from the rest of the Of Montreal catalog.
In the past, character study records such as “The Wall” and “Tommy” have been vastly an introspective journey, but “Skeletal Lamping” chooses to simply explore the rabid sex drive of Georgie Fruit. Songs such as “Beware Our Nubile Miscreants” tell of the dark vices of someone’s boyfriend that run the gauntlet from a Halo addiction to cooking meth to the joys of self-pleasure.
While the song may seem slightly humorous, the fact that it breaks down from delightful psychedelic pop to something that mildly resembles a funk Fall Out Boy would make is utterly unappealing.
Without a doubt, this is the experimental Of Montreal album. At times, it doesn’t even feel as if one is listening to “Skeletal Lamping,” as it more resembles fragments all thrown into a shredder to be rearranged and mismatched. If there was any sense of purpose or progress, it would be groundbreaking, however, it succeeds only in being exhausting.
The truly fine tracks appear when Barnes returns to his tread over lyrics, themes and material. “Triphallus, To Punctuate!” returns to the combination of self-loathing, jealousy and boasting that has defined the group. Although the song continues the tradition of moving through genres and tones, it at least follows a natural progression and seems logical enough.
Kevin Barnes has changed Of Montreal’s sound many times and fans have been with him as he weathered the progression from dance to pop to psychedelics, but this newest shift is a fine example of an artist taking his license to experiment too far. It may be time for Georgie Fruit to just go back to being the Kevin Barnes that have grown to love.
Grade: C-
More from VoiceMore posts in Voice »