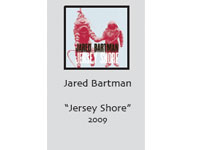 Campus favorite Jared Bartman continues to impress fans with his real flair for innovation and endless musical creativity, and his latest release is proof.
Tonight is the album release concert for Bartman’s first full-length album, “Jersey Shore,” where he will play the album in its entirety. It is his latest effort since his successful second E.P., “I Refute Technology,” released in May 2008.
Bartman said he is looking forward to tonight’s show, especially playing for those who have never experienced his music before.
“‘Jersey Shore’ was crafted to be a group of songs meant to be heard and studied in a certain order, in one sitting,” Bartman said. “I am very happy to be able to present my new record to people who may have not heard me before, in the way I’ve intended the songs to be heard.”
Bartman said the biggest difference between “I Refute Technology” and “Jersey Shore” is the musical approach he took in composition.
“I see ‘I Refute Technology’ as being conceptual in musical form, being at its most basic element a study in song arrangement and a somewhat tongue-in-cheek critique on modernity,” he said. “I see ‘Jersey Shore’ as having a very distinct narrative thread, being more consistent in musical style and musical/lyrical threads.”
Bartman’s musical influences are endless, but he provided a list of some of the ones that made the biggest impact on him as a musician. Among those on the list include Neutral Milk Hotel, The Beatles, Tom Waits, Bob Dylan, The Mountain Goats, Bela Bartok, Wilco, Django Reinhardt, Sufjan Stevens, Scott Solter, Bon Iver and Radiohead.
“Most of these musicians think of the record as a specific art form, which is a view that has been very significant for me,” Bartman said.
Alongside musical inspiration, many specific surrounding influences went into Bartman’s “Jersey Shore,” including literature and musical subjects he has studied here at Bradley, family relationships and T.S. Eliot’s “The Wasteland” and “The Love Story of J. Alfred Prufrock.”
A senior and double major in music and English, Bartman plans to head to a different city upon graduation, to pursue music and a graduate degree in ethnomusicology. Bartman’s love for different styles of ethnic music, most specifically Eastern European folk, is very apparent in the way he composes his own work.
When asked where he wants to be in 10 years, Bartman said he still plans on making records for as long as he can, even if it’s not his primary job.
“I want to be entrenched in music somehow, whether it’s teaching, researching or making records,” he said.
Active in publicity, Bartman has sought out more record labels and show opportunities than can be counted, and continues to broaden his fan base with live shows both on and off campus.
The band, which consists of Bartman, percussionist Aaron Kavelman and multi-instrumentalist Erik Juhl, collaborated on musical arrangements for the records and play together whenever possible. When Kavelman and Juhl aren’t available, Bartman plays solo. For tonight’s concert, Bartman will be accompanied by his two bandmates, along with an ensemble of 11 talented musicians recruited from Bradley’s Music Department.
As for more music, we’ll have to wait and see. Bartman said he and his bandmates are intent on following through to make this record the most successful yet. However, he does have ideas surfacing for some new material for fans.
“There may be a 7” vinyl record surfacing sometime next year featuring a couple of unreleased songs of mine that need a home,” Bartman said. “I’ve also been conceptualizing for the next full-length record and have recently been turning to some of my professors at Bradley for advice on some points of departure for research.”
Bartman’s following continues to grow exponentially as he pursues his passion. His roots in music are unshakable, and his ideas are some of the most innovative ever seen on this campus and beyond. Clearly, there are many exciting things he is headed for. Now all we have to do is enjoy the ride.
More from VoiceMore posts in Voice »