Jersey Shame: How I got heel Stabbed and didn’t eat in order to meet Snooki 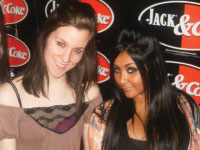 The idea of screaming fans usually brings to mind swarms of preteens drooling over their latest idol.
Sometimes, though, these admirers might be slightly older, with a lot less drool and much more hair product.
Fans of MTV’s “Jersey Shore” flocked to Cam’s last Friday night to catch a glimpse of Snooki, the show’s pint-sized star, and for those too fearful to venture there, don’t worry, I went for you.
As I entered Cam’s, I could already see everyone had become infected with the desire to look like “Jersey Shore” cast members.
Symptoms included guys looking like Jon Gosselin and girls with super teased and poofed hair, extra make-up and tight clothes. Members of both sexes practiced continuous fist pumping and yearned for Jaager bombs.
I arrived at the bar early, unsure of when Snooki would arrive and hoping to secure a prime Snooki-watching spot. The anticipation in Cam’s built with every passing minute.
As she finally slipped in through the side door, the DJ made it known she was finally there, and the crowd shifted to the side stage to see the self-proclaimed “guidette” make her arrival.
After taking a few heel-stabs to my feet, elbows to my stomach and punches to the back, I finally pushed to the front of the crowd and couldn’t believe that Snooki, a woman whose drunken antics I ashamedly loved watching week after week, was standing right in front of me.
The possibility of watching her cartwheel on the dance floor while inebriated was enticing enough, but with cameras flashing all around me, the dream of taking my picture with a reality star was within reach. Some of us dream for Olympic glory, some of us just want to hang out with reality stars.
With Snooki making her way down the line, taking pictures with pleading fans, the audience around me became more aggressive. While I wanted to meet her, I wasn’t prepared for the battle wounds that came with it.
Before I knew it, the girl in front of me was smiling and taking a snapshot that would most likely become her Facebook profile picture in a matter of hours. It was supposed to be my turn until some girl in a black dress shoved her pointy heel in front of mine, swiping my spot and denying me a chance to take a picture with Snooki.
Snooki then left the area to make her way upstairs, a spot where only very important people could be graced with her presence. Apparently, without the proper wristband, I was a nobody.
Defeated, I trudged over to the bouncer at the front door and reluctantly spent my food money on the wristband.
Once adorned with the black and red band, I walked upstairs to stand in a line, though this time, my wait involved much less physical harm.
After what seemed like forever, I finally was at the front of the line. I sat down on the bench next to Snooki and smiled for my picture, whereas she only puckered her mouth, creating what looked like a bad impression of Zoolander’s Blue Steel or possibly Le Tigre. I can never be sure.
As someone who has been lucky enough to meet other celebrities who are much more famous than this D-lister, I thought I would try my hand at striking up a conversation, but I was rejected faster than Snooki usually is when looking for love at the Jersey Shore.
Once I rejoined my friends downstairs, the place seemed to clear out as if the whole ordeal never happened, as if Snooki just disappeared and magically transported herself back to the Shore or rather, downtown to her next stop, Carbon.
Was it worth? I’d be lying if I said no, but at the same time, Snooki’s overblown ego and some bumps and bruises left this night with much to be desired.
More from VoiceMore posts in Voice »