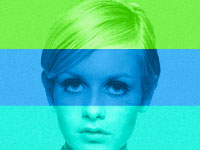 The 1960s undeniably made history in the fashion scene with many new and creative ideas. Designers gathered inspiration from the simplest of shapes to create timeless outfits.
Musicians and politicians alike had a significant impact on the American consumer – not only for their talents, but also for the clothing they wore. Here are the trends, influences and outstanding players from the world of 1960s fashion.
MAJOR TRENDSETTERS
The 1960s had an endless string of models and film stars who set a fashionable standard for their loyal followers.
Nicknamed for her twig-like appearance, Twiggy was the face of mod fashion in the ’60s. Born Lesley Hornby, she was a superstar in every sense of the word. Her bold eyes and modern style became an iconic look and gained her all-star status in the modeling world.
An obvious staple in wardrobes of the ’60s, the bikini became widely popular with help from feature films. Actresses like Raquel Welch and Annette Funicello launched bikinis into vast popularity with roles in “One Million Years B.C.” and “Beach Party.”
MEDIA / POLITICAL INFLUENCE
Stephanie Sidak, an entertainment media major at Chicago’s Columbia College, explained that the media had a great impact on the decade’s fashion movement.
“One key player in the fashion world in the 1960s was Jackie O.,” she said. “The time that her husband was president was around the time the television started becoming a household fixture, so people were exposed a lot more to political figures.”
The all-American look was easily translated into consumers’ personal styles. For example, a cardigan might be paired with a knee-length pencil skirt for a conservative look for school or work.
“Jackie had such great style, and through television coverage of the first family, that really translated to the American consumer,” Sidak said.
SHOES
Beginning in the mid ’60s, trends changed and the focus shifted to accentuating the legs. With the rising popularity of the mini-skirt, hemlines rose above the knee. This created a brand new silhouette and infinite opportunities for stylish footwear.
Go-go boots, a low-heeled riding boot usually made of patent leather or vinyl, became extremely popular. The boot rose all the way up to the knee and zipped up on the sides. The versatile nature of the go-go boot made it easy for any woman to wear, whether daring or modest.
Other common shoe options included the low kitten heel, the square-toed saddle shoe and the tennis shoe, all of which were available in a wide selection of bright colors.
MUSICAL INFLUENCE
Music hugely influenced the fashion scene in the ’60s. Women and men alike could closely follow the trends set by their favorite performers.
“It seems that men of [the early ’60s] took fashion cues from their idols like the Beatles,” BU Fashion Focus President Alyson Martinez said. “They were such a huge sensation and were idolized by many.”
Matching Edwardian suits and John Lennon’s infamous glasses were among the fashions made popular by the group. The mop-top-sporting rockers were always fashion savvy and had a permanent influence on popular culture.
Around the mid ’60s, the attention shifted to innovative dressers such as Jimi Hendrix,  with the guitarist being known for his very unique style and his ability to accessorize with medallions, brooches and scarves. He normally wore a military-style jacket or vest, or a velvet suit.
The combination of his great stage presence and fashion sense became part of his legacy. Anything Hendrix wore was innovative and stylish. His fans looked up to that.
The hippie movement was full of creativity. Alongside stars like Hendrix, musicians such as Joan Baez and Janis Joplin were extremely influential to the popular clothing of that era.
Long, flowing hair, sunglasses and puff-sleeved peasant tops launched into popularity right alongside the celebrities who wore them.
“Just as today, what those musicians wore outlined the trends for young adults,” Martinez said. “They were the trendsetters of the time.”
More from VoiceMore posts in Voice »