Kanye will determine the direction of the music (and the marketing) 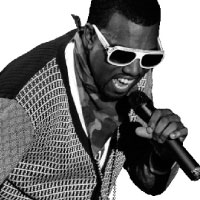 A month ago, producer turned rapper turned household name pop-sensation Kanye West did a really stupid thing.
On Sept. 16 Kanye released “Love Lockdown,” the first single for his next album, “808s and Heartbreak.” It was up on Kanye’s blog for two days, but quickly removed and for good reason.
The sound quality was terrible. The T-Pain-style auto-tuned vocals Kanye has taken a liking to couldn’t mask the artist’s poor singing. The Oriental-sounding drums that pick up the bounce effect halfway through the song were off-beat, and the whole song sounded amateur at best – definitely not the work of one of rap’s greatest producers. Luckily, Kanye covered his tracks and a second version of “Love Lockdown” was released Sept. 18.
This single had promise. The vocals were re-mastered with a spacious echo modulation. The heartbeat bass line that backs the song was heavier and tighter. The previous drum samples were exchanged for cleaner sounding Japanese Taiko drums. Even an electro midrange lead helped to give the song depth.
The day after it was released on iTunes, “Love Lockdown” was the No. 1 download and the iconic deflated heart-shaped balloon that graces the record’s cover was the heading banner. Sure, it was a good song, but what kind of music was it?
Hip-hop artists who have used auto-tune in the past were still making hip-hop. T-Pain, the first artist to really bring vocoder vocals back into mainstream music, used it to create soaring hooks and Lil’ Wayne used auto-tune in combination with his spitting-style of rapping to make him sound like a robot. But it was all still hip-hop/rap music.
I’ll be the first to admit that what is being considered as rap music has been stretched in the last few years. It used to be that hip-hop was dominated by a message, usually one expressed through rapping or even spoken word.
A good emcee could rhyme, flow and still say something. Briefly examining the classic case of Tupac vs. Biggie, few people would argue that Pac had a better flow – you would have to chalk that up to B.I.G. – but his message was stronger. I like “Gimme The Loot” as much as the next guy, but “Brenda’s Got A Baby” was untouchable as far as Pac’s message.
In the last few years though, things have changed. The uplifting emcees of decades past have been all but replaced by producers such as Lil’ Jon (a few years ago), T-Pain and now Kanye West. Club play takes priority over message, or even meaningful lyrics, and even more recently an artist has to consider ringtone playability when considering a beat.
A week after Kanye released “Love Lockdown” on iTunes, he released the six stems to the track on his blog, which he made available free to listen and download with the intention that anyone could remix the song.
Included are the piano, outro synth, a cappella, distorted vocals, percussion and 808 stems. This isn’t the first time this has been done, but it’s one of the first times it’s been done in hip-hop/rap.
Radiohead released the stems for “Nude” earlier this year and very recently did the same for “Reckoner,” both from the “In Rainbows” album, and Jay-Z released the a cappella version of the tracks from the “Black Album” in 2003. These artists have released pieces of their music to the public but nothing to the extent Kanye has done.
The response of the DJ community since then has been incredible. A remix by Los Angeles duo LMFAO gives “Love Lockdown” an electro-house makeover complete with a disco-bass backbeat and substituted (still auto-tuned) lyrics, while T Minus 321’s drum and bass remix of the single got 10,000 downloads within 48 hours of its release on Perez Hilton’s celebrity gossip Web site.
There’s the rare hip-hop remix, such as the one from Staten Island native AC, featuring a bumping bass line, soulfully stringed bridge and a moving R&B lead, but the majority of the remixes are much more club-oriented, straying into electro, house and even jungle genre territory.
The resulting sounds aren’t hip-hop at all and out of context, as even the soulful wailing from the original song sounds more at home in a euro-trance club banger than on a Kanye album.
What does this mean for the rest of the rap game? By releasing “Love Lockdown” stems into the public sphere, Kanye gave house DJs everywhere an excellent song to dissect and remake, with some arguing that more music and genre blending isn’t necessarily a bad thing.
But what if more rap artists start doing this? Kanye has made clear his upcoming album “808s and Heartbreak” is going to have a lot more singing than rapping and perhaps more auto-tune than is completely necessary.
Will this mean more “Love Lockdown”s – single-worthy pop songs that sacrifice lyrics and a message for catchy hooks and choruses? To make it big, is the next Tupac going to have to play Ne-Yo?
One thing is for sure. If one of the biggest names in pop music continues in this direction, others will follow and that may not be a good thing.
More from VoiceMore posts in Voice »