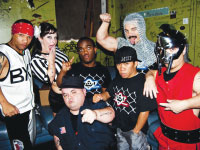 You’ve seen them on “Jerry Springer,” destroying everything in their path, wrecking furniture, taking out referees and trashing the sets.
I’m not talking about porn stars, angry moms or even drunk kissing cousins.
It’s midget wrestling, and it’s going to be in Peoria.
Extreme Midget Wrestling is coming to the Grand Hotel on Sunday.
Seven wrestlers from the league have been touring the country, performing to sold out crowds in Texas, Oklahoma and Arkansas.
“We sell out every night,” said Skyler Warden, the wrestler’s manager. “We’re like Metallica. It’s amazing. In Little Rock [Ark.] the bar owner couldn’t believe how many people were pulled in on a Monday night.”
Of course, a show that features the likes of Big Boy, The Tiny Terminator and Nasty Boy is sure to draw a crowd.
Nasty Boy, who occasionally goes by Danny Campbell, has been fighting for 28 years, and at 4-foot-8, he doesn’t seem much like his childhood inspiration, Hulk Hogan.
“I liked his persona,” Campbell said. “He could throw the world.”
Campbell always wanted to be a wrestler and couldn’t be happier with the direction his life has taken.
“It’s been a childhood dream that I’ve fulfilled,” Campbell said. “I’ve never let anything get in my way.”
In a profession as prone to injuries as wrestling, Campbell is surprised he has never sustained any harsh injuries in his nearly three decades of fighting.
“I haven’t broken a bone in 28 years,” Campbell said. “I think I’ve hurt every damn muscle known to man. You’ve got to be like that crazy pitbull, man, lick your wounds.”
For Campbell, the real world isn’t that far away from getting into the ring.
“Extreme wrestling is pretty crazy stuff,” he said. “My whole life is pretty crazy, brother. The whole world is crazy. You can’t be normal and survive in this world.”
All of the craziness in the world is what drives Campbell. When people are losing their jobs and dealing with tragedy, he focuses on the performance.
“My favorite part is entertaining people,” Campbell said. “With all the corruption and depression in life, I put a smiley face on the whole world.”

and ringside seats are $25.

Tickets are available at all Co-Op Records locations and ticketstorm.com