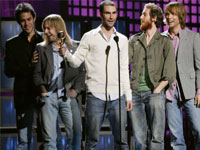 Maroon 5 has been one of the most astonishing pop success stories of the decade.

On the strength of their first album, “Songs About Jane,” which debuted in 2002, the band was able to release five chart-topping singles. Songs including “This Love” and “Harder to Breathe,” turned the band into international stars.

Their integration of hip-hop, funk and soul with hypersexual pop appealed to a vast audience and catapulted them into superstardom.

With their second album “It Won’t be Soon Before Long” in 2007, the band proved it could still sell albums, smashing digital download sales and breaking iTunes records.

Although the album was nominated for Best Vocal Pop Album of the year at the Grammys, it did not win, but the group still took home an award for the song “Makes Me Wonder.”

With critical accolades as well as the devotion of millions, Maroon 5 had become one of the most recognized and popular pop acts recording today.

At their performance Thursday at the Peoria Civic Center, Maroon 5 showed off all the chops that helped them reach this level.

Lead singer Adam Levine has always embraced a sort of grimy, sexualized lounge singer persona, and whether he was leaning against the microphone stand in a way that would have made the Rat Pack proud or singing his more intimate songs from a stool, he was able to bring whatever personality was needed.

The rest of the band admirably kept up, but it was obvious from the collective screams of the audience every time he jumped to the music or approached the front row that Levine was the star of the show.

The whole band appeared genuinely glad to be performing to the nearly packed Civic Center Theatre.

Whether it was some good-natured stage banter, getting the audience clapping or just talking to the audience about the venue, the band tried to really connect.

“This is a nice theatre,” Levine said. “You should be proud of it. I wish I had a theatre like this.”

For about 75 minutes, Maroon 5 was able to keep the crowd on their feet as they ran down a list of some of their most famous and recognizable tunes.

Audience members were also treated to a new song, “Last Chance,” from their planned 2010 album.

The band finished their set with probably their most recognizable song, “This Love,” and they still had a lot of fun with a song they had been touring with for more than five years.

As they walked off stage, almost immediately an ear-splitting request for an encore began, and Maroon 5 was back for two more songs, finishing with “Sweetest Goodbye.”

There were no technical mishaps, and besides an attempt to cover “Another Brick in the Wall Part 2,” by Pink Floyd, Maroon 5 stuck to what they do best – singing highly accessible, chart-topping, funk-influenced songs that show off a deep knowledge and appreciation for the genre.

Overall, the concert was a very authentic and solid performance from one of the most popular bands touring today.

It is impressive that a band this big came to Bradley, and the fact that Maroon 5 put on such an entertaining show demonstrates their strength as performers and their willingness to please fans.