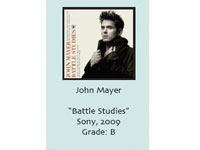 John Mayer is infamous for his love of women – namely beautiful, big-named celebrities.
For a period in time, he was better known as a playboy than a talented singer-songwriter.
With “Battle Studies,” however, Mayer aims to gain his credibility back, through his seemingly infinite knowledge of writing sappy love songs and passive-aggressive break-up ditties.
Though never stepping outside of the box, ironically something he sang about on his first CD “Room for Squares,” Mayer delivers an enjoyable, if not consistent, album, putting him into the Dave Matthews category of dependable, steady-sounding popular music.
“Battle Studies” is short, with only 11 songs filling the roster. With such a time gap between his last album “Continuum,” which was released in late 2006, it’s easy to expect more. Nonetheless, it still adequately fills the John Mayer music void of the last few years.
The love and hate songs mesh well together, and with someone who lives such a high-profile life, each song is like a guessing game, trying to figure out during which relationship each was written.
“Heartbreak Warfare” starts the album out on an interesting tone. It sounds refreshingly different from the usual melancholy Mayer, relying on more than just his guitar skills.
Allegedly about Jennifer Aniston, the lyrics hit hard, with the opening lines setting an uncharacteristically aggressive pace, “Lightning strikes/Inside, my chest to keep me up at night/ Dream of ways/ To make you understand my pain.”
Keeping with the heartbreak theme, “Assassin,” with a much heavier guitar, tells the story of Mayer and his ability to easily break girls’ hearts.
Mid-song, however, he feels what it is like to be on the other end, when he encounters a female “assassin,” like a musical version of “Mr. and Mrs. Smith.”
The song seems to be almost cathartic for Mayer, repenting for his womanizing ways after a stark realization.
“The Edge of Desire” ponders about life in a Mayer-ian way, wondering where everything is really taking him, before shifting focus to a powerful yearning for a certain someone. While his voice almost comes across as whiny, it works well with the feeling of the song and actually sounds good.
Other songs aren’t as winning, though they aren’t terrible either. They are just harmless, falling somewhere in the middle. “Perfectly Lonely” is disgustingly catchy and seemingly forced, like he is pretending to love the freedom that comes with being single.
While filled with stellar guitar solos, “War of My Life” is a standard song with soul-searching lyrics, perfect for a brooding Facebook status. “Half of My Heart” is a cute, unoriginal song, but “Featuring Taylor Swift” is an easy way to gain some fans, even if she barely sings a line.
The problem with “Battle Studies” seems to be with the slower songs. “Do You Know Me at All” is too moody for its own good, and “All We Ever Do Is Say Goodbye,” though with interesting lyrics, is easily forgettable.
One of the standouts of “Battle Studies” is the already-released “Who Says.” Talking about one-night stands, drugs and a changing persona, if paired with the wrong melody, the song could fall under the lines of a modern rap song or classic rock ’n’ roll. With its soft, simple melody and Mayer’s soothing voice, the pithy jokes actually work, even with lyrics like, “Who says I can’t get stoned?/Call up a girl that I used to know/Fake love for an hour or so.”
While “Battle Studies” is nothing spectacular, it is dependable, easily making it into the rotation for Mayer fans, and its reliability guarantees that its play will last much longer than a Mayer relationship.
More from VoiceMore posts in Voice »