Mickey Rourke delivers in “The Wrestler” 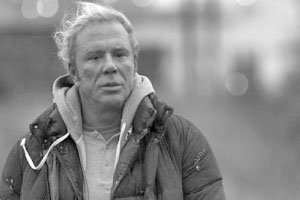 “The Wrestler” does a lot with a little.
It is the kind of dark and gritty film that gets stuck between your teeth, almost making you shudder in its unrelenting realism.
The movie is comparable to Scorsese’s “Raging Bull” in the American professional wrestling arena. It’s also that most-recent “Rocky” movie with a touch of professionalism.
The plot follows the story of Randy “The Ram” Robinson (Mickey Rourke), as he finds himself in shambles and deteriorating health with the 20th anniversary of his biggest match right around the bend.
As the aging Randy tries to piece his life back together by reuniting with his estranged daughter and wooing his favorite stripper, Cassidy (Marisa Tomei), the pieces keep slipping from between his fingers.
“The Wrestler” is the story of a has-been, fading long after his 15 minutes in the limelight. Rourke nails it. It sounds like a strange compliment, but he fits the part perfectly (you may remember him playing a similar long-haired monster as the cook in “Spun”).

Rourke almost makes it a Frankenstein story, portraying Randy as a kind-hearted and misunderstood brute. You don’t quite feel bad for Randy, but his story is grossly human.
The whole movie encompasses only a couple of months, and very little actually happens, yet it doesn’t drag or stumble. It’s marked by top-notch performances and director Darren Aronofsky’s signature bleak, grainy cinematography (“Requiem for a Dream”).
Highlights?  There’s a great scene of Randy working as a deli clerk in a local grocery store.  Watching him thumb through thrift-store clothes racks and find hideous picks for his daughter elicited a laugh, too.
Above all, it’s really kind of funny watching someone of Rourke’s caliber do the Sylvester Stallone act.
There’s more than a couple of reasons to go see “The Wrestler,” but it’s a little hard to digest. It’s not a bad thing, but it’ll be on your mind for a day or two afterward.
Personally, I loved it, but I’m a sucker for Willy Lohman stories. My advice? Go see it since you’ll be hearing about it more as Oscar season progresses.
More from VoiceMore posts in Voice »