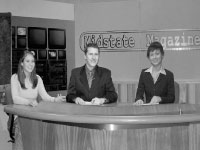 If you haven’t heard of Midstate Magazine yet, now is definitely the time to check it out.
Midstate Magazine, a student-produced television show, is a collection of news, sports and entertainment sections, all featured live on Peoria cable access channel 22. “Midstate” describes the Central Illinois location of the show, and the term “magazine” is used because Midstate is a television publication covering a variety of topics.
Sandra Hall, a junior electronic media major, is host of Midstate Magazine and a feature reporter for “The Spotlight,” an entertainment section of the show. She also works as the production manager, running the equipment and managing audio bays.
Hall said she loves her job at Midstate, and is passionate about working in this field.
“We have fun with the shows,” she said. “Everyone here has a personality.”
The show covers a wide range of subjects, including local news, Peoria attractions, movie reviews and area restaurant reviews. Every segment is independently shot, edited and hosted live by students.
I had the opportunity to tour the entire studio, which is located in the Global Communications Center. The studio is remarkable. Hall said their equipment is some of the most state-of-the-art in the entire area.
Next, I was able to meet a couple of students working with this equipment.
Kirk St. John and Jacob Anderson, both junior electronic media majors, were editing feature stories for the upcoming show this Tuesday. Of course, I knew nothing about editing, so they explained to me the high-tech software and computers are really helpful in creating a finished product.
Hall said in her three years working at Midstate, it has been the most fun she’s ever had. She emphasized the fact that at Midstate, just about anyone can find a job that suits him or her.
She said a common misconception people have when thinking about working at a television show is that they have to be on television, which isn’t true.
“You can do a lot of stuff behind the scenes,” she said. “You don’t have to be on camera.”
Currently, there are openings for reporters and jobs involving technical aspects of the show, like camera operation and audio board. Hall said if anyone is interested they should go to the John C. Hench Studios located on the main floor of the GCC.
Clearly, everyone involved with Midstate Magazine plays an integral part in the creation of the show.
Executive Director Bob Jacobs said this is a highly competitive field, so students who work at Midstate are treated as professionals.
“Students need to know what things are like in the real world,” Jacobs said. “It’s an enormous business.”
An alum of the film school at the University of Southern California, Jacobs said he recognizes the importance of electronic media. Before he came to Bradley around 17 years ago, Jacobs knew there were many students with the capacity to do production, filming and behind-the-scenes work. He said Midstate was founded in the hopes of providing those students with a creative outlet.
The project began with six people putting the show together, but has grown to include 25 to 30 students running the show.
“It’s really taken on a life of its own, which is what I wanted,” Jacobs said.
The students have the opportunity every two years to go on a trip to Hollywood, where they can see what really goes on behind the scenes of different productions.
Jacobs said he believes students will better understand how much goes into a production by seeing it done in person.
In his time at Bradley, he has taken his students on 29 excursions to California.
On the trips, the group meets with writers, producers, directors and grips to name a few. The students even have a chance to meet with celebrated names in Hollywood like Ray Bradbury (who, incidentally, is Jacobs’ godfather).
Jacobs said he is proud of the students who work to make Midstate Magazine a newsworthy success.
“This field is the only art I know of that you can’t do alone. It’s a team effort,” he said. “We are responsible for retaining the moral fiber of our society, and that’s what we try to do at Midstate.”
More from VoiceMore posts in Voice »