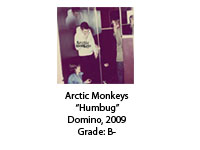 For a band hailed as the next big thing out of the U.K. since Oasis, it is still surprising that more people haven’t heard of the Arctic Monkeys.
With its third album, “Humbug,” released on Aug. 25, the lads from across the pond are steadily entering into American consciousness, though longtime fans may be disappointed.
Those of you still wondering “Who The @*%! Are The Arctic Monkeys?” look up its first two albums.
The debut album “Whatever People Say I Am, That’s What I’m Not,” and breakthrough single “I Bet You Look Good On The Dancefloor” came out in 2006. Through constant touring and Internet fan pages, it became the fastest-selling debut album in British music history.
Sounding like the recording came straight out of the garage, the raw energy and unpolished nature of the band appeals to any fan of the do-it-yourself attitude. Each song in “Whatever People Say,” composed of what seems to be several tunes hacked together, evolves beautifully with its own beginning, middle and end. Singer Alex Turner is an observant and sometimes bitter wallflower – commenting on situations with a strong Yorkshire accent that adds a charming flair to his otherwise brooding nature.
The Monkeys’ sophomore album, the significantly heavier “Favourite Worst Nightmare,” perfected its unique formula to make a CD that sounds fantastic from start to finish. The album is much more polished than its predecessor, but still maintains that sound of controlled chaos with songs like “Brianstorm” and “Teddy Picker.”
As a third album, “Humbug” in its entirety may seem to be a bit of a disappointment, though it only appears so when compared to the Monkeys’ previous works.
Produced by Queens Of The Stone Age frontman, Josh Homme, the Monkeys introduce a new dreamy background ambience of sound that was only hinted at with Turner’s side project, The Last Shadow Puppets.
Also, fans of producer Dangermouse will appreciate the introduction, but it might alienate those waiting for another dance number.
The first single, “Crying Lightning” weaves dreamy guitars and clever wordplay into a grand showcase of what the band does best. Pulling together Turner’s storytelling genius and the band’s penchant for a living, breathing musical backdrop, “Lightning” is the best song on the album.
Halfway through the album, long-time Monkeys fans expecting something more dynamic and danceable will find it in “Potion Approaching” and then “Pretty Visitors” with more familiar, funky rhythms.
Most of the songs are missing that defining vitality that allowed each song to unfold into several different rhythms and melodies.
Perhaps it is a sign of the band’s maturity, to make a song as consistent as some of these are, but I miss the almost haphazard combinations of song elements. Of the ten songs on the CD, only a handful follow the usual configuration.
It is unfair to say this is a step back for The Arctic Monkeys. Instead think of “Humbug” as a slight sidestep exploring only a certain vision of the band.
Fans can appreciate that the Dylan-esque social commentary-through-storytelling is still there, further defined in soulful ballads like “Cornerstone.”
While “Humbug” would indeed complete the collection, fans of the first two albums are better off looking up the multitude of unheard B-sides, which are all masterpieces in their own rights.
More from VoiceMore posts in Voice »