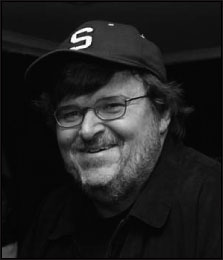 If one word sums up Academy Award winning filmmaker Michael Moore, it has to be polarizing.
With successful documentaries such as “Fahrenheit 9/11” and “Bowling for Columbine” under his belt, the left-wing muckraker does have his fans. Then again, with such reactionary films and books as “Celsius 41.11” and “Michael Moore Is A Big Fat Stupid White Man,” more than a few critics certainly have a political-bone to pick with the Michigan native.
His latest, “Slacker Uprising,” is bound to stir up as much controversy as before, but it may be more from its method of distribution than content.
In a rather gutsy and unorthodox move, Moore has turned the documentary into a big thank you for his loyal fans, allowing anyone – even Republicans – to download it off of his Web site for free.
Set during the 2004 election season, “Slacker” chronicles Moore’s 62-city tour across the American political landscape with the hope of achieving one goal – getting Bush out of office.
Bearing the slacker-approved gifts of clean underwear and ramen noodles, the self-described liberal aimed to have the 43rd President of the United States ousted by having every non-voter and young person get out there, register and vote.
Although Moore’s strategy obviously didn’t go exactly as planned, the Slacker Uprising Tour couldn’t be called a complete failure. Even though the tour garnered more controversy than a couple of supposed WMDs, by the end of it more than 16,000 people a night started showing up to hear the filmmaker speak.
And throughout the film’s 97 minutes, “Captain Mike” never lets the viewer forget it.
The freewheeling director is constantly flanked by fervent supporters, rabid detractors and the local media. And with each new city and each protested rally, the process repeats ad nauseam. The problem is the man can’t help but soak it all up.
“Slacker” could’ve very well been an excellent launch pad on a number of important issues, something which would seem almost natural for the rabble rouser.
Instead, it quickly degrades into a conceited self-promotion piece, where the only lesson learned is that Michael Moore likes Michael Moore and he’s very pleased people in various cities agree with him.
This is not to say the film and its writer-director are completely without merit. Moore’s previous documentaries have often played up his tongue-in-cheek style, and “Slacker” does have a few shining moments where this peeks through such as his own version of 2004’s swift boat ads. On the other hand, more sensitive types may have issues with typically Moorian comments such as “what would Jesus bomb?”
The old saying “you get what you pay for” has never rung more true than with “Slacker.” Love or hate Moore, awards and box-office sales have shown he’s capable of creating a compelling film, but “Slacker” completely misses the mark.
It’s a shallow movie plagued by wobbly pacing, lackluster editing and poor political timing, where the only thing accomplished is Moore tacking another flick – and a bit more hullabaloo – onto his resume.
For a man claiming to help service the nation, “Slacker” instead only helps to service his own ego. Documentarians need to present issues and facts, not personal highlight reels.
Grade: D+
More from VoiceMore posts in Voice »