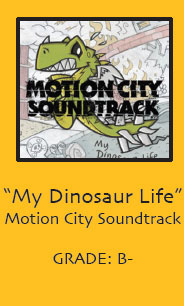 Since 2002, Motion City Soundtrack has been releasing anthems of youthful rock to people all over the world.

With the release of their fourth studio album, “My Dinosaur Life,” under their first major record deal with Columbia Records, Motion City Soundtrack is still holding true to their fan base and sound after eight years strong.

With Blink-182’s Mark Hoppus as a producer, it is easy to see how this is the best album the band has recorded since “Commit This to Memory,” which, coincidentally, Hoppus helped produce as well.

“My Dinosaur Life” is a far cry from Motion City Soundtrack’s third studio album “Even If It Kills Me.” Just as any band must, they have grown in their sound. It is apparent when listening to their sample song “Disappear” that Motion City Soundtrack has come back with a much heavier sound than in the past.

The album begins with the line “It’s been a good year, a good new beginning,” which is the perfect way to start off this particular album.

The album is full of heavy strumming choruses, repetitive verses and catchy bridges. However, the first half of “My Dinosaur Life” has a more monotone sound than the second half does. Some songs that stand out on this album are “Stand Too Close,” “The Weakends,” “Skin and Bones” and “Disappear.”

One disappointing thing about this album is Motion City Soundtrack lacks the diversity of sound they had in past years. Sure, the new, feel-good style the band incorporates in this album sounds like you should be having fun while head banging during a car ride, but after a while, you might have to turn to something else if you don’t want to listen to the same thing over again.