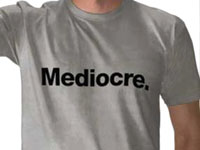 Every day as I walk to class, I immediately turn my iPod on and start shuffling through my songs. Depending on my mood, I might skip over one or two, other times one hundred, until I can find the right beat for the walk.
I was in a particularly picky mood the other day, skipping through much of the pop music that filled my childhood, when I realized how lame half of my songs were. When I got home, I scoured my movie collection and while large, recognized that it was filled with more blockbuster comedies than indie darlings.
Right then, I had a moment of self-realization, one that I wish I never had.
On the pop-culture spectrum of cool, I fall somewhere between Miley Cyrus and Paul Rudd, way removed from George Clooney, Bonnaroo performers and anyone with an Olympic gold medal, even if it’s in curling. That might even make them cooler.
To put my lameness into perspective, I have almost everything any member from O-Town has ever done. I even have a live DVD of them in concert and will vehemently argue that they were the best boy band of their generation. (They wrote songs! They could play instruments!)
I also have a soft spot for singer-songwriters, especially guitar-wielding ones, and it helps if their first name is Matt (see: Costa, Hires, Nathanson and White).
This isn’t to say that I don’t have some indie music in my library, but usually my new, hip music comes from commercials or soundtracks.
I’ll try and redeem myself by name-checking some bands on my iPod, including The Avett Brothers, Phoenix and Girl Talk. (Not better? At least I tried). My collection is, however, void of Nickelback, the Jonas Brothers and Justin Bieber, so I have that going for me.
As far as movies go, anything the Frat Pack has done, I probably own. Other criteria to make my collection: Brat Pack films, Judd Apatow-produced projects and most romantic comedies with a happy ending.
While I’m perfectly comfortable admitting I will never be a trendsetter in the pop culture world, I still wish I had better taste. I wish I could listen to obscure music with grating background noises and a lead singer who squawks out lyrics between long awkward pauses as I rock giant headphones, as all hipsters seem to do.
I also dream that one day I’ll be able to watch a deeply serious, overly depressing black and white foreign film with no real plot and think it was so poignant and heartrending, but right now, watching a film like that seems more like a nightmare.
Instead of trying to make myself become cool, it’s much easier to accept my middling place on the cool scale.
Maybe one day the world will come around, and average will be respectable. Until that day, I’m content with my mediocrity.
More from VoiceMore posts in Voice »