NBC’s “Saturday Night Live” Draws on Past for new movies 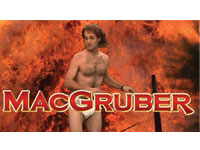 Voice Essential Albums: “Grace”Among people who take television way more seriously than they should, there is only one hard and fast rule of discussion.

Nearly everyone believes there was a certain indecipherable “golden age” when the show was amazing, but now it has fallen on sad times. The show’s comment section on Hulu reads like a bitter illiterate eulogy.

In June, Will Forte appeared on “Late Night With Jimmy Fallon” to announce a movie based on the character, MacGruber, was being made. Recently a trailer has been released showing the titular character going up against terrorists who have acquired a nuclear warhead.

Sure, MacGruber has been one of the more consistently entertaining bits on the show, but the whole joke is that the character only has a few seconds to diffuse a bomb. It’s the same premise every time and most of the time, the joke only works because of the limited amount of time he has to work with.

Most “Saturday Night Live” movies have struggled with developing a sketch into a worthy feature film. At best, a sketch is given about six to eight minutes to give consistent laughs, and expanding admittedly shallow characters into ones that can carry a 90-minute movie seems to be an insurmountable task.

However, there have been a few success stories. By turning a pair of suit bedecked blues fans into a massive star-studded band that is able to dodge every cop in Chicago, John Belushi and Dan Akroyd were able to make “The Blues Brothers” into not only the biggest earner in the show’s filmography but arguably its biggest success story.

The film delivers fantastic comedy bits with the likes of Carrie Fisher as a gun-toting jilted ex-fiance and excellent musical numbers, such as Aretha Franklin’s memorable performance of “Think.”

Other movies have succeeded on their own merits. “Wayne’s World” manages to expand on the characters in a way that seems natural, believably get away with more obscenity than they could on national television and still deliver a fitting story, and its sequel is also a success simply by upping the scale of Wayne and Garth’s exploits.

Virtually the rest of the material has been a waste. Movies like “A Night At the Roxbury” and “Superstar” both tried to make the audience care about characters that had previously existed without any actual traits and then tried to shove them into a feature length film.

None are as bad as “It’s Pat,” a film so ridiculous it was pulled from theaters after only one week when its one joke failed to pull a crowd.

“MacGruber” has a lot going against it, but with the last “Saturday Night Live” movie being “The Ladies Man,” it has nowhere to go but up. Regardless, if it can pull together, Will Forte and company may finally be able to prove that he is in the company of genuine talent.