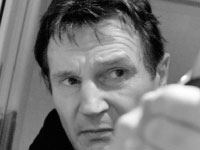 “Taken” takes absolutely no effort. It begins, and it’s good, and it keeps going, and it’s good and then you’ll walk out and say “Hey, that was pretty good.”
I could give you the entire plot synopsis and not spoil anything you didn’t already expect, but that doesn’t mean “Taken” isn’t worth checking out.
“Taken” is the story of an ex-government agent (Liam Neeson, “Gangs of New York”) whose talents and home handgun arsenal are pulled out of retirement when he travels to Paris to rescue his kidnapped daughter.
After making sure you’re comfortable in your seat for about 10 minutes, the movie takes off and stays pretty steadily action-packed and suspense-drenched until the end.
Neeson’s character is not known as a cold-hearted killer. A lot of bad guys just get in his way.
The story ends less than 96 hours after it begins, by which time Neeson has run into every one who’s ever even heard of Albanians in Paris.

To add to the suspense, Neeson is being chased while he’s looking for his daughter with a 9mm in a haystack of criminals.
None of this comes off too cheesy, though. Since the movie moves at 100 mph, anything deeper than the basic plot is only alluded to or briefly discussed. By the end of the movie, you’re still not quite sure what Neeson’s character does for the U.S. government (at one point, he mentions being a “preventor of bad things”).
“Taken” took the set props and camera lens from the Bourne trilogy and every decent action movie since 2000 (ever notice how everything in “really intense” movies is subdued by some kind of weird blue-ish filter?)
It’s not the cinematography that sells the movie.
It’s Neeson.
He develops into a pretty interesting and multi-dimensional character throughout the movie.
He goes from smiling to pistol-whipping seamlessly, but also does a great job with his character’s interactions.
At one point in the film, Neeson goes to his daughter’s birthday party, hosted by his ex-wife and her new husband. The restrained, unnatural way Neeson interacts with everyone there is great.
He ends up presenting a lot of different sides to his character, which is impressive, considering all the character development in the script seems pretty bare bones.
This may not be a movie that transfers to home screen so well.
It feeds off a lot of audio and visual dynamics that a huge screen and a theater full of speakers provide. I’d say if you’re a big suspense/thriller kind of person, it’d be worth making a night out of.
“Taken” is far from painful to watch. The credits were rolling before I’d checked my cell phone out of boredom once. If you’ve got the time and you’ve wanted to see Liam Neeson in something good for a little while, then go and see “Taken.”
More from VoiceMore posts in Voice »