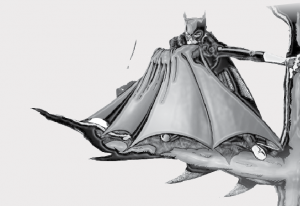 DC Comics’ ambitious relaunch of their 52 titles in a post “Flashpoint” world was a bold move, both financially and creatively. Restarting the timelines of their biggest characters such as Batman and Superman didn’t inspire a lot of confidence in readers, but has had a huge payoff. The move to digital distribution and a focus on bringing back old characters in inspired ways is paying dividends.

That being said, the primary titles are still bogged down by continuity and often times awkward art and storylines not used since the ’90s. “Batman” brings back the little known/appreciated Damian Wayne as Robin and continually references old storylines that new readers aren’t going to catch on to.

With this in mind, the relaunch is excelling at telling new stories about b-list characters. Nowhere is this more evident than in “Batgirl,” a longtime fan favorite book that is spinning the story in original ways and telling an exceedingly rare story for the medium.

Writer Gail Simone puts Barbara Gordon back under the hood and although she doesn’t explain how the formerly crippled character can walk again, she does give the character the requisite spunk and style for the character, but also gives her the fear of being put back in the chair that grounds her.

Gordon ends up being a hero who may just be afraid of doing her duty. Unfortunately for her, a brand new villain, the very mysterious and homicidal Mirror, isn’t going to give her time to get over her issues. He’s killing off gangsters and low lifes, and Gordon is getting closer to the top of his list.  It’s rare that a comic book does a true mystery, but it looks like Simone may be trying to write one. How well it works out remains to be seen.

For those trying to jump into comics in light of the relaunch and rise of superhero related entertainment, the slightly more offbeat books may be the place to go and few are telling as powerful or interesting story as the “Batgirl” relaunch.