By LITTLE EAGLE(Non-Hipster Extraordinaire ) on March 29, 2013 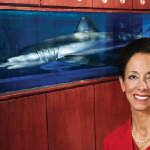 After catching a great white shark off the coast of Florida a few weeks ago, Bradley is bringing “Lydia” to campus in order to boost admission rates.

“Most universities can talk about their stellar sports teams, functioning libraries or how campus doesn’t completely flood after a few hours of rain,” University President Joanne Glasser said. “But our wonderful university has a great white shark. I am proud to say Bradley is a university of national distinction in that regard.”

The shark was captured on accident by non-profit organization OCEAREACH, and scooped out of the water by a giant Caterpillar Inc. hydraulic excavator.

“Honestly, we were just doing oceanic research,” Caterpillar Inc. spokesman Steve Higgins said. “But once the administration heard we caught a shark, they were all over it.  They wouldn’t let it go.  Literally.”

“I’m not even sure how or when Shelley got on the boat,” Higgins said. “He held on to that shark, screaming that the university was in dire need of it. He even got bit a few times.”

Epstein said he is proud of the latest Bradley recruit.

“We’ve got students from every state in the country and 37 nations across the world,” Epstein said.  “Now we can say we’re representing the Atlantic Ocean in our student makeup. What other university can say that? Only a university of national distinction can.”

The shark, which is named after founder Lydia Moss Bradley, is being transported back to campus in a giant above-ground swimming pool. Glasser said the university is in the process of building the shark’s permanent residence.

“We were originally going to put Lydia in the Markin swimming pool, but for some reason students were opposed to that,” Glasser said. “Instead, we are using all available funds to construct a tank in my office, where Lydia will advise with me during office hours.”

Besides student advisement, Lydia will serve the university in a few other ways.

“I’m thinking we should have her patrol campus,” Bradley University Chief of Police Brian Joschko said. “What armed robber would go up against a great white shark named after an old lady? We’ll even let her take the Hilltop Cruiser for a spin.”

“She doesn’t even have feet, let alone a driver’s license,” he said. “Can’t we just have her pose for some photos wearing Bradley stuff?”

In all, Glasser said capturing Lydia is the greatest achievement of the university thus far.

“Sending students to the Olympics? Who cares,” she said. “Having a Bradley graduate in President Obama’s Cabinet? Big deal. But catching a great white shark, naming her after your university’s founder and forcing her to live in the Midwest? Easily the best decision I’ve ever made.”

As Glasser watched the construction of Lydia’s tank last week, she smiled as a single tear rolled down her cheek.

“We finally did it,” she said. “We’re finally a university of national distinction.”