New technologies owe a debt to the old and dead 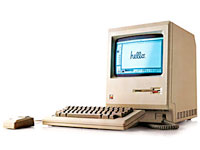 Our wired world is truly an addictive one, just ask the Secret Service about Barack Obama’s Blackberry habit.
Although the President-elect is clearly excited to start the next stage of his newly acquired title, he has been less than enthused with the idea of a complete digital disconnect for the sake of national security.
This is surely a presidential ban any tech-savvy American can sympathize with, but even though devout gadget addicts won’t do away with their cell phones and 3G network, most have been more than happy to toss any of the technological relics residing in their basements and update to the latest and greatest.
However, those ever present packrats will always have a few dusty gizmos lying around from these bygone days, often in poorly labeled boxes filled to the brim with ungrounded cords and connecters for long-dead formats.
While wives and neat freaks usually consider these piles of wires and circuitry as a generous contribution to the local landfill, these treasure troves of dead tech do allow for a certain amount of nostalgia and sheer wonderment.
When it comes to the pure gee-whiz factor, most individuals are stunned when they learn the TI-83 calculator most current students use in high school algebra has more computing power than the Apollo 11 Guidance Computer. Yes, the same one which landed Neil Armstrong and Buzz Aldrin on the moon.
But when it comes to simple reminiscing, veteran techies will typically gaze at the reasonably priced 12TB raided NAS hard drives they picked up at Newegg.com while cringing at the original $3,500 price tag of their first 5MB drives.
For those deficient in computer lingo, this wallet crunching comparison can be paralleled to the cost and mobile abilities of Apple’s sleek iPhone to Motorola’s now infamous 2-pound, $3,995 brick phone.
Even if this once coveted device may be best remembered in the hands of Gordon Gekko and Zach Morris, technological advancements like it attest to the debt we digitally inclined consumers owe to the pioneering programmers and engineers at companies like Microsoft and IBM.
After all, if a geeky Star Trek fan at Motorola hadn’t invented the brick phone in 1984, the RAZR craze would never have happened 20 years later.
The same theory applies to those wonderfully portable machines called laptops, which most historians claim debuted in 1981 with the $1,795 Osborne 1. This batteryless suitcase-sized hunk of plastic and metal weighed a barely luggable 24 pounds and didn’t even have any storage for anything like today’s thousands of iTunes and torrent downloads.
Still, most of Generation Y was lead into the digital realm with the Apple II, as many of the popular desktops invaded American school districts with the sole purpose of hooking youngsters to the Macintosh brand for life. Taking a look at Apple’s increasing market share, CEO Steve Jobs can pretty safely say “mission accomplished.”
But unlike today’s fancy disc-reading MacBooks, the Apple II is more than capable of booting that old 5 1/4 -inch floppy of Oregon Trail.
Wasn’t it always fun when the kid who pulled your hair or stole your milk during lunch died from dysentery?
But it was in 1982 where computing really took off, as the world was introduced to the Commodore 64. Although the classic machine was nothing revolutionary, it did manage to achieve the status of “best selling personal computer of all time,” a title I’m sure either Compaq or Dell wouldn’t scoff at.
However, the Commodore 64 was used for more than word processing. Any hardcore gamers worth their Gamerscore frequently find the computer’s simplistic 8-bit gaming capabilities superior to such high-powered behemoths as the Playstation 3 and Xbox 360.
Even though both console and computer gamers are always longing for the next bump in processing power or slight up tick in frames-per-second – just watch them get chills by mentioning Intel’s latest processor, Nehalem – the average consumer has often thrown away such incremental improvements to the wayside.
This mentality has hit the world of high fidelity sound and video the hardest, but DVD has managed to break through this barrier to become the latest mainstream video format.
While these shiny discs have reigned triumphant, simply sifting through the video box at a garage sale or thrift store is evidence that many older formats have died for the sake of DVD’s supremacy.
One obvious example was the bitter battle between JVC’s VHS and Sony’s Betamax, with many early adopters remembering the hundreds of dollars spent on the now defunct formats. But only the few will remember VHS’s first optical disc rival, those giant-sized discs aptly called Laserdiscs.
On paper, the format’s visuals and audio were clearly superior, but Laserdisc would only maintain a niche market with videophiles throughout the 1980s and 1990s.
The fact that movies spanned multiple discs and had to be flipped over every hour might have been Laserdisc’s biggest detractor. But with America’s constantly expanding waistline, maybe the format could be reinstated as a 21st century exercise program.
In fact, maybe archaic tech are the best way to go in general. Most of it may come in an awful shade of green-gray, but we’ll take an ol’ reliable over a gimmicky piece of carbon fiber and aluminum any day.
The poor printer in “Office Space” may have had a death wish, but it certainly took a beating before being put permanently out of commission.
That’s a guarantee only the 1980s can provide.
More from VoiceMore posts in Voice »