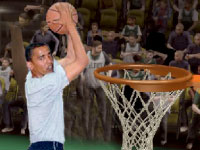 The Democratic campaign in video games

If you’ve played a football game in the past couple weeks, remember this – when you scored the touchdown, Barack Obama did the victory dance in the end zone.

At least that’s what’s happening in the world of video games. No fewer than 18 games are currently streaming campaign ads for the Democratic presidential candidate. Gamers will see signs like billboards with the Illinois senator’s face in games like “Madden ’09” and other sports related games, although Obama snagged space in the “Guitar Hero” series as well. And while you can’t make B-rock shred a hot guitar solo during “Sweet Child O’Mine,” it’s nonetheless a revolutionary way of advertising.

“These ads will help us expand the reach of VoteforChange.com, so that more people can use this easy tool to find their early vote location and make sure their voice is heard,” Obama spokesman Nick Shapiro told the Associated Press.

The campaign ads, which appear to those playing on an Xbox 360 console, target voters in states like Ohio and Iowa that allow early voting. Some of these states are the ever-so-crucial swing states. When an Xbox 360 owner jumps online to face off against internet players, the server can recognize the player’s location and instantly embed Barack Obama advertisements in the game.

Knowing voter trends differ from state to state, the ads are not all timed the same. Players in bigger states might not see the ads as often as those in smaller states.

Signaling a new phase for advertising, the ads began appearing at the beginning of October, according to the Associated Press article. But why the decision to target players of sports video games? Those in the video game industry say it’s all about the age demographic.

“It reaches an audience that is typically hard to reach – young males, roughly 18 to 34,” Holly Rockwood, a spokeswoman for video game company EA Sports said. She added that the medium of electronic sports games is appealing to advertisers in general.

The politician benefits from this, but the video game companies aren’t selflessly volunteering space either. Rockwood wouldn’t divulge a figure for how much EA made from these ads, nor would she say a typical price for ad placement. Chances are Obama isn’t having trouble paying up – his campaign has raised over $600 million in funds, almost reaching the combined total of George Bush and John Kerry’s funds in 2004.

Not everyone in the coveted 18-34 demographic is thrilled with the idea.

“I think it’s a waste of campaign money,” senior political science major Brian Piotrowski said. “They’re going after a group of voters who are traditionally unreliable, and they don’t know if they’ll show up to the polls. Besides, when I play video games, I’m not noticing the billboards. I’m focused on actually playing the game.”

Piotrowski, an Obama supporter himself, conceded that despite the dynamics of advertising in video games, he can see why the candidate’s team would try such a measure.

“Even for an election year, politics is getting a lot of hype,” he said. “I can’t say I’m completely surprised.”

The inclusion of political advertising in video games also raises an ethical question in addition to the cultural discussion. Is this too invasive?

Regardless of what players and voters alike have to say, media professionals think it’s a natural step in the marriage of politics and technology.