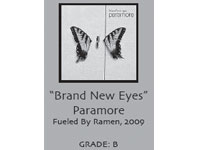 In 2004, I was 14 years old and starting high school. Zac Farro was 14 years old and starting a little band called Paramore with his older brother, Josh, and their friends Jeremy Davis and Hayley Williams. A year later, Zac’s band signed a record deal with Fueled By Ramen, home of pop-punk superheroes Fall Out Boy and Panic! At the Disco.
Simultaneously, I was learning how to drive while listening to Fall Out Boy and Panic! At the Disco. Later that year, Paramore released its debut album, “All We Know is Falling.” If Paramore hadn’t been so successful, they would be in college today. Today, while we go to class, Paramore, whose members are all between 19 and 24 years old, is touring the country to promote its third album, “Brand New Eyes.”
“Brand New Eyes” takes a step toward maturity, which was something Paramore’s previous album, “Riot!,” lacked. “Riot!” could have been the soundtrack to any suburban high school and that is not a bad thing. That album took Paramore from an opening act to a headliner but it’s evident the band has grown up since 2007.
When Paramore began to write for “Brand New Eyes,” the band was close to breaking up due to intense struggles with self-doubt individually, and within the group. Because of this, many songs on the album seem to be about conflict, but the listener can trust Paramore has worked everything out because Williams says so, blatantly, in “Looking Up.”
“Looking Up” is by far the strongest track on the album. It’s a happy, celebratory song about how much the band genuinely loves being together and it’s believable. It’s musically similar to “Riot!” but lyrically and emotionally like “My Heart” from “All We Know is Falling.”
One can picture Josh Farro (backup vocals/lead guitar) absolutely rocking out while Williams smiles through her more cynical lines (“God knows the world doesn’t need a n o t h e r band / but what a waste it could’ve been”). “Looking Up” is the only song on the album that is both positive and energetic.
Musically, “Brand New Eyes” is fantastic. Williams’ voice sounds older and she’ll admit it through lines such as “I’m not the same kid from your memory. / Now I can fend for myself” in the first single, “Ignorance.”
Instrumentally, Paramore hasn’t changed much. “Brand New Eyes” is the same old formula of chugging guitars and bass. Drummer Zac Farro’s work in “Careful” is impressively precise.
Sadly, a few songs on the album, such as “Turn It Off,” are not very memorable, which contradicts the theme of resolution throughout. Unfortunately, as a whole, “Brand New Eyes” lacks the staying power that “Riot!” had. It sounds a lot like The Starting Line’s final album, “Direction.”
However , “Brand New Eyes” will draw the listener in and leave them wanting more Paramore.
Overall, I recommend “Brand New Eyes” to any longtime Paramore fans, as well as fans of The Starting Line and New Found Glory. It’s an album that proves Paramore is wise beyond their years. As a group of friends, they may have the same types of conflict, but at least they can put it to music. The same cannot be said for the average college-aged kid.
More from VoiceMore posts in Voice »