Players shoot for the moon, barely lift off 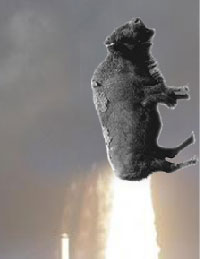 While humor and quality haven’t always gone hand in hand, there’s one inherent rule when it comes to making anything remotely comedic – it has to be funny. After all, when a comedy falls flat, it often lands with a resounding thud.
Case in point is the latest production from the Peoria Player Theatre, “Moon Over Buffalo.” While the farce elicits a few modest chuckles, most of the play’s half-baked punch lines were just allowed to lay scattered on the theater floor, discarded and simply forgotten.
Sorry to say, it’s acts like these that confirm showbiz as a harsh mistress, and nothing gets the brunt of this fickle industry more than the material itself.
Set during the 1950s in Buffalo, N.Y., “Moon” centers on the theatric lives of traveling actors George and Charlotte Hay. The constantly bickering couple have their sights firmly set on achieving fame, a daunting task considering the thespians’ shared status as fading stars.
By chance, lady luck decides to give George a visit in the form of famed director Frank Capra.
Shooting his latest film, “The Twilight of the Scarlet Pimpernel,” Capra decides to give George a shot as leading man, but only if he manages to pass the audition by pulling off a successful matinee of the play “Private Lives.” With the director on a plane to New York and the Hay clan on the verge of a mental breakdown, theatrical success appears to be a far off dream for every madcap individual involved.
Although “Moon” has the basic structure of a solid comedy, with the time-tested stock characters of a crotchety old grandma and fiance with the in-law jitters, it can’t deliver in terms of memorable or even mildly humorous dialogue. At its best moments, the two-bit farce plays out like an old episode of “The Honeymooners” or “I Love Lucy,” albeit one that deserves to be left on the cutting room floor.
With such a formulaic plot and cookie-cutter roles, it’s hard to justify why even a few cheap laughs couldn’t have of fallen out of the script’s pages. Either way, it’s a sad day when the intermission brings a sigh of relief and a longing for the fire escape by the show’s audience.
But while play selection may have been Peoria Players’ primary error, it still doesn’t excuse the lackluster performances by certain cast members.
Real-life couple Bruce and Pat White seem to revel in the mediocrity of their roles as George and Charlotte at first, as both don’t do much beyond pander to the typical marital conventions of TV sitcoms. However, as the first act starts to wear on into the second, both theater veterans settle into their respective characters with gusto, helping to give a rather shaky production a bit of grounding.
On the other hand, Andrew T. Harrison and Maureen O’Haenny are definitely the play’s bright spots as Howard and Ethel.
While a minor character, Harrison embodies his role as the Hays’ skittish future son-in-law Howard, and thankfully brings a bit of much needed normality to the often heavy-handed “Moon.”
O’Haenny manages the same as Charlotte’s doddering and cranky mother Ethel, with the actress’ spot-on comedic timing eliciting most of the show’s only laughs.
The rest of the cast gives commendable performances as well, with the sole exception of Debra Hasselbacher.
While only the occasional snag marr the performances of the play’s other members, Hasselbacher’s excessively shrill and overbearing portrayal as the Hays’ daughter Roz grows especially irksome with each subsequent scene. Only in Act II does “Moon” play up to her talents, as the maddening Roz steps in at the last minute as an understudy for the show’s play within a play.
But what makes this mess of a production all the more harrowing is its association with Hollywood icon Frank Capra. Considering the directing legend adapted the classic farce “Arsenic and Old Lace” for the silver screen, the only merit “Moon” deserves in this day and age is for desecrating the beloved director’s memory and body of work.
Excuse me while I roll Mr. Capra back into his grave.
Grade: C-
More from VoiceMore posts in Voice »