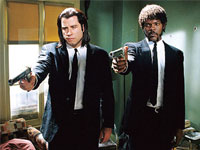 It’s been 10 years in the making, but it is finally here.
One of the generation’s finest filmmakers, Quentin Tarantino, has finally released his self-described masterpiece, the World War II film “Inglourious Basterds.”
Sure, there have been some missteps, namely both “Kill Bill” films, but Tarantino’s collected works remain excellent and nothing else can be expected from his newest offering.
However, for those who are not familiar with the man who gave us the “royale with cheese,” he can be an intimidating director. His films have never been the most accessible, and his sense of humor and ridiculous violence can turn off many potential viewers.
In his honor, here is a primer for neophytes or long-time Tarantino fans to prepare themselves for “Inglourious Basterds.”
“Reservoir Dogs”:
Tarantino’s first film, “Reservoir Dogs,” is full of the snappy banter and over-the-top violence that eventually became his trademark. The story of an assembled group of thieves and a diamond heist gone wrong told through an entirely nonlinear storyline quickly became a cult hit, receiving rave reviews when it was released at the Sundance Film Festival in 1992.
It’s hard to ignore the impact “Reservoir Dogs” has had on film and pop culture as a whole. The scene in which Mr. Blonde, played by Michael Madsen, tortures a kidnapped police officer to the song “Stuck in the Middle With You” has become a cultural touchstone. The film also features fantastic performances by Steve Buscemi and Harvey Keitel.
“Pulp Fiction”:
Certainly Tarantino’s most famous film to date, “Pulp Fiction” is an homage to the hardboiled detective fiction of the 1920s and ‘30s. The film is told in an extremely nonlinear fashion. Starring Samuel L. Jackson and John Travolta, the film tells the intertwining stories of the lives of mobsters, wise guys, drug addicts and lowlifes in Los Angeles.
Even more so than Tarantino’s first film, “Pulp Fiction” features topical conversations and eclectic humor and dialogue. Watching “Pulp Fiction” should not only be recommended to appreciate Tarantino’s work, but it should be a required viewing for any fan of modern cinema.
“Natural Born Killers”:
Although Tarantino did not direct it, he did write the script for Oliver Stone’s satirical crime story “Natural Born Killers.” Starring Woody Harrelson and Juliette Lewis as a pair of star-crossed lovers on a cross-country killing spree, the film is a blatant attack on the way the media report and romanticize the exploits of criminals.
Shot with a variety of lenses and several different filters and including homages to classic television such as “Leave it to Beaver” as well as showing commercials from the era, “Natural Born Killers” prominently features television as a way to show a nation consumed and obsessed with violence.
“Grindhouse”:
Sure, “Grindhouse” is really only half Tarantino, with long-time collaborator Robert Rodriguez taking the other half, but the double feature shows his influence throughout. From the “stripper with a machine-gun for a leg” of Rodriguez’s “Planet Terror” to Tarantino’s own “Death Proof,” featuring a group of girls fighting for their lives against a crazed stuntman, the whole thing is full of over the top violence and sexuality. It’s all created as a sort of reference bible to a long ago period of exploitation film.
It’s a shame that it is still impossible to get the trailers that were featured in the middle of the film on DVD. “Werewolf Women of the S.S.” and “Hobo with a Shotgun” were just as entertaining in their own way as the entire double feature.
More from VoiceMore posts in Voice »