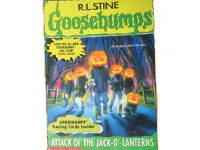 “Choose Your Own Scare.” “The Haunted Mask.” “Horrorland.”
Done nostalgically wallowing in the creepiest, spookiest corners of your childhood?
R.L. Stine’s “Goosebumps” series permeated every literate grade-schooler’s life at some point. It was hard to avoid the frenzy, as there seemed to be a new book out every week, and also a TV series, movies, toys, fruit snacks, games and even underwear.
Yeah, I’m pretty sure I had the “Goosebumps” underwear.
It was pretty hard not to be drawn to these easy-to-read books with the cool covers, where kids (just like me) got into some pretty weird situations, such as “Go Eat Worms!”
However, I recently stumbled upon an old favorite, “Attack of the Jack-O-Lanterns.”
Now I have to say, it isn’t the creepiest of Stine’s books like “Night of the Living Dummy.” The title is not as clever as “Say Cheese and Die!” And the cover artwork isn’t nearly as impressive as a staircase dripping with “Monster Blood,” but hey, it’s still a genuine “Goosebumps” book.
After establishing the main character as a mischievous and tough 12-year-old girl named Drew, we find out Halloween is her favorite holiday. However, it was ruined i n the past by a couple of big jerks, Tabby and Lee.
Two years ago, the two pranksters faked a break-in and a strange hostage situation where Drew was forced to do pushups. So this year, Drew has a plan to get even – thus beginning the good old-fashioned revenge tale, “Goosebumps” style.
The book’s blood-dripping chapter numbers flew by as I read the text at a record pace. Almost every chapter ends in a mini-cliffhanger. One example is a big gruesome monster biting its razor sharp fangs into Drew’s flesh. Then she realizes that it’s only a Halloween mask.
If you get frightened at all at the end of these chapters, it’s OK. Just turn the page and the benign phenomenon will be explained instantly.
Drew somehow convinces Tabby and Lee to go trick-or-treating, which is strange, since they seem to be mortal enemies. You see, Tabby is stuck-up and dresses like a princess every year, and Drew is a bit of a tomboy. (Oh, and Drew also has a tendency to growl at people … I counted seven “grrrrr’s” throughout the 113-page story.)
Drew has a bit of a complex and is described as small and elf-like, which lends itself to her deep resentment of almost everyone. This Halloween is Drew’s last chance for revenge, and her last time to trick-or-treat. (Because apparently you have to stop the moment you hit your teenage years.)
While trick-or-treating, the gang meets up with what they assume are their twin friends, Shane and Shana. They are wearing pumpkin head masks, with real flames in the jack-o’-lanterns.
Tabby and Lee are scared because eventually it becomes clear that these pumpkin heads want them to keep trick-or-treating … forever!
I don’t want to spoil the ending for you … but the pumpkin heads really were their friends the whole time. They just happened to be shape-shifting aliens who have abducted, killed and eaten fat adults in their town for the past few years.
Oh, and if you are wondering if that little jack-o-lanterned dog (the one on the cover) appears in the book, don’t bother looking. He is nowhere to be found, which is the only disappointment moment of reading this nostalgic book.
More from VoiceMore posts in Voice »