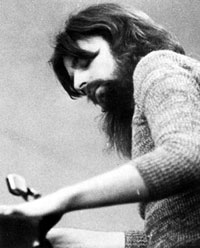 Rock ‘n’ roll lost a vital member two weeks ago when founding Pink Floyd member Richard Wright passed away in his home in Great Britain. He was 65.
Wright succumbed to cancer on Sept. 15, but specific details are sketchy. His spokesman would not divulge the form of cancer and went on to say the family wished fans would respect their privacy during this time.
With Syd Barrett, Roger Waters, Nick Mason and later David Gilmour, Richard Wright (often called “Rick”) played a key part in Pink Floyd’s sound and laid claim to some of rock’s most adventurous compositions when the floodgates really blew open in the 1970s. In addition to handling keyboard duties, he contributed haunting backing vocals. He would only occasionally step up and sing lead, but his dreamlike voice made for a handful of distinctive Floyd works.
He had writing chops, too. Until the sessions for 1977’s “Animals,” a dark, intensely political album which marked the beginning of a fault line within the group, Wright maintained a songwriting presence on each release. He was mostly responsible for two of the band’s career standouts – “The Great Gig In The Sky” and “Us and Them” – without which the band’s landmark LP, “The Dark Side of the Moon,” would not have been the same.
Things got rough near the end of the 1970s. After releasing the double-album opus “The Wall,” Waters shouldered Wright out of the songwriting process, relegating him to backing musician status for the following tour. Wright did not appear on the final Floyd album with Waters, fittingly titled “The Final Cut.”
When lead guitarist Gilmour continued under the Pink Floyd name some years later (to Waters’ disdain), Wright remained, steady as a rock.
The keyboardist isn’t usually at the forefront of Floyd-related discussions, but he had an influence on the group’s sound that cannot be ignored.
“He was just such a big part of their trippy spacey sound,” Matt Warren, an employee at Peoria record store Younger Than Yesterday, said. “What he added was that kind of Oriental-sounding stuff. And when synthesizers came out [in the late 1970s], he was right there.”
Wright’s band mates recognized this as well, and heaped significant praise upon him after his death.
“In the welter of arguments about who or what was Pink Floyd, Rick’s input was enormously forgotten,” Gilmour said on his Web site. He went on to comment that during his 2006 tour, on which Wright accompanied him, the ovations for Wright’s performances always surprised him.
“It’s a mark of his modesty,” Gilmour said.
When speaking of his late friend, Mason highlighted the unwritten agreement in the rock world that a band is more than just the sum of its parts.
“Like any band, you can never quite quantify who does what,” he said in an Entertainment Weekly interview. “But Pink Floyd wouldn’t have been Pink Floyd if [we] hadn’t had Rick.”
It appears time has healed at least some wounds, and Waters’ public statement seems just as heartfelt as that of his peers, despite his past differences with Wright. He said Wright’s contribution lent the songs an air of “extraordinary humanity and majesty.”
Wright played with his friends at the mega-concert Live 8 in July 2005, and his last studio appearance was on Gilmour’s 2006 album, the lush-but-chilling “On An Island.” Wright can be seen on Gilmour’s concert DVD, “Live In Gdansk,” which was released Tuesday.
Listen to these:
Rick Wright has gone off to his own great gig in the sky, but he doesn’t have to be forgotten. Without these Wright-penned songs, Pink Floyd just wouldn’t have been the same.
“The Great Gig In The Sky” (from “The Dark Side of the Moon”)
This eerily calm track lies on a piano melody Thom Yorke would wreck his skull to write and floats along gently enough – until a one-woman gospel choir breaks through the heavens, backed by a fierce church organ.
“Summer ’68” (from “Atom Heart Mother”)
Waters would eventually dictate Wright’s degree of participation, but in his own songs, Wright couldn’t be held back. Like “The Great Gig,” “Summer” starts with a warm piano and bursts into a richly melodic jaunt with “ba ba ba” backing vocals evoking Beach Boys as much as The Beatles.
“Interstellar Overdrive” (from “Piper at the Gates of Dawn,” co-writer)
Not everything from the man’s head was so accessible. Like most jams that make it to record, this one starts off in disguise. The first minute is a spy theme without a spy movie, although it begs Quentin Tarantino to write one for it. Then it unravels – the tight espionage guitar riff soon melts into a noodly keyboard and a funhouse of spacey cinematic imagery.
More from VoiceMore posts in Voice »