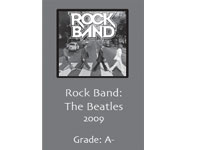 Without question, The Beatles is one of the most influential and highly praised rock ’n’ roll bands of all time. In only seven years, they were able to capture both the imagination and praise of a troubled youth during desperate times through their catchy, typically upbeat songs about love and (during their later years) the influences of drugs.
So it’s only fitting a band as influential as the Beatles should get its own video game jam-packed with tons of classic hits such as “Twist and Shout” and “Helter Skelter.”
However, there is more to this game then just a collection of nostalgic hits, which on its own would be enough to entice most Beatles fans. Instead the game goes one step further with a unique story-telling element that begins with the first time the Beatles ever performed in a bomb shelter in London in 1963, to their last live performance on top of the Apple Corps Building in 1969.
All of these locations are exceptionally recreated for the game, and really make you feel like you’re right alongside them as they drive their fans absolutely crazy.
Besides the actual physical locales available, there are several fictionalized environments that are in place for the couple of years they were recording one of their most highly praised albums, “Abbey Road.” These environments range from beautifully majestic, to down right trippy, especially when you play “Lucy In the Sky with Diamonds.”
The backgrounds for that song can be extremely entrancing and give the game a certain calm that just pulls you in and can make it difficult to play through as the bright vibrant colors flow smoothly back and forth in front of your perplexed eyes.
On top of that, there are tons of collectibles to be had for the die-hard Beatles fans out there and consist of everything from old black-and-white photos of the band to actual video footage of the group on the tour bus just fooling around. Although its not an essential purpose to the overall gameplay, it still makes the game feel that much more authentic and dedicated to a band that changed the way we listen to music forever.
As far as the gameplay is concerned, there isn’t much that has changed from the whole formula of pick your instrument (drums, guitar, bass, vocals) and play.
However, with the addition of being able to harmonize with up to three vocalists at once, it gives the game not only another layer of challenge, but also allows those people who know the Beatles’ songs by heart to sing their favorite parts in unison with two or more partners.
This gives the game an engaging, yet easily enjoyable aspect that is perfect for parties. Anyone can simply pick up a microphone and sing along to their favorite songs with friends at their sides just like the Beatles did nearly 40 years ago.
My only real problem with the game is the small number of songs available. While the developers are promising more songs via download over your console in the coming months, it would have been nice to have been given a larger variety for fans to play from the get go.
Even this gripe is extremely minor, considering these songs carry so much nostalgia with them, you could probably play them over and over again and never get sick of them.
In the end, it’s simply impossible to deny how much this game has to offer both long time fans and people who are vaguely familiar with the band. It provides not only a superb variety of tracks, but also captures how everyone remembers the Beatles and why they were – and still are to this day – one of the best rock ’n’ roll bands to capture the imaginations and hearts of everyone who hears them play.
More from VoiceMore posts in Voice »