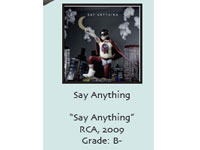 Say Anything has been a band of their own kind since they first formed in 2001.

From singing humorously about a girl touching herself over the phone to love songs that make hearts melt, Say Anything is known for touching upon easy-to-relate situations.

In their fourth studio album, self titled “Say Anything,” frontman Max Bemis certainly shows how the band continues to broaden their sound.

Listening to Say Anything is like boarding a rollercoaster. One minute, you are heading toward the clouds, then the next, you are wishing to be six feet under.

The emotions Say Anything creates embody the life that frontman Max Bemis has had since their last album “In Defense of the Genre.” Since then, Bemis has visited many mental institutions and has had many relationships, both terrible and unbelievable.

The album starts with the song “Fed to Death,” This song sets the story-like mood, which draws you in, making you want to listen to the rest of the album.

But just when you least expect it, this sweet, melancholy-turned-emo song turns into something different.This is what the whole album is like.

Then “I Hate Everyone” starts playing, stating that Bemis is the “angriest boy of them all.” Automatically, this sets a, bipolar mood to the rest of the album.

Another outstanding song is “Do Better,” which is notably one of the more different songs on the album with its sudden string quartets and upbeat tempo. “Do Better” is structured like one of the newer Death Cab For Cutie songs, with melancholy and catchy tunes.

This album is genius. Not because of its musical talent, which is questionable in some songs, but due to the fact that Bemis has created an embodiment of himself in a CD form. If Max Bemis were an album, he would be this one. He takes you through his life with the different timbres of his songs.

The song “Mara and Me” makes you feel like you’re in a sick, twisted, and dark place with its waltz-timed sound. Then, when Bemis says, “Wait a minute, I can’t keep writing the same song over and over again,” the whole feel of the song completely changes into something unlike the way it sounded before.

This is the kind of material that puts them on top of most emo bands out there. Some of the songs are a bit repetitive, but due to its different sounds, you will definitely not get bored listening to this album in one sitting.