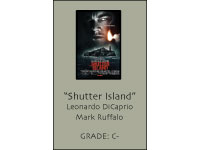 Martin Scorsese’s “Shutter Island” plays like a lesser episode of “The Twilight Zone,” prolonged to a bloated running time that tests audience endurance for dusty cliches and obvious red herrings.
The script follows U.S. Marshal Teddy Daniels (Leonardo DiCaprio) as he wades endlessly through alternate realities, each registering as underdeveloped and none engendering the quotient of suspense expected from a thriller or the visceral emotion that gushes from the director’s finest work.
Daniels, upon arriving with affable new partner Chuck, (Mark Ruffalo, relatively successful in noir-caricature mode) begins to suffer from migraine headaches and World War II flashbacks.
The source of Daniel’s debilitating physical and emotional disturbances and the subject of his visions provide “Island” with ample reality-shifting fodder but reduce the film’s overall structure to resemble cobbled remnants of superior noir-thriller, horror and war films.
Though the genre experiment allows Scorcese to indulge in his period fascination, cerebral horror tropes, World War II imagery and thematic obsession of guilt, these disparate elements amount to little more than a succession of occasionally mesmeric set pieces whose flow is continually interrupted by excruciatingly long expository scenes that exploit outdated stereotypes of the mentally ill while rarely commenting on the cruelty of such misconceptions.
While indefensible practices such as the frontal lobotomy are rightfully dismissed as barbaric, the incessant attention to mental landscapes often devolves into elementary gawking barely ornamented with unconvincing jargon.
“Island” structurally suggests the psychological resolution of Hitchcock’s “Psycho” played on an endless loop, with the occasional psychotropic drug experiment or Nazi conspiracy spliced in.
Though the sheer audacity and ridiculousness of some of these narrative diversions suggests fun, the laborious, relentlessly repetitious rhythms grate rather than startle. Just as the film opts out of the curiosity and social awareness of “The Twilight Zone” while mining its eerie, found-effects laden sound design and jarring twists, “Shutter Island” plucks from Hitchcock’s psychological thriller without retaining any of his innate sense of pacing.
“Island” is more successful in maintaining a shadowy, noirish period ambiance subtly retouched with CGI.
The film is not visually flawless, though. Scenes that rely more heavily on CGI, such as an initially beautiful vision of raining ashes, are too anachronistic to resonate. Such missteps may have been excusable if the film had managed to cultivate an empathic relationship between the leads and the audience.
Michelle Williams, appearing only in perhaps psychedelically-induced hallucinations as DiCaprio’s deceased wife, is given nothing to do but whisper ghostly nothings in her widow’s ear and stare through glassy eyes.
DiCaprio is most assured at the film’s beginning, which comes as little surprise considering the many changes in narrative reality that emotionally disengage both actor and audience from “Shutter Island.”
This is perhaps the film’s most glaring problem – highly stylized Holocaust scenes, mental illness and the graphic murder of children, all tossed heedlessly into the mix, demand a certain level of pathos. Yet the most melodramatic moments of “Island” deservedly incited unintended laughter from an audience that never had a chance to emotionally connect with the film because of the pulpy recklessness of its structure.
The scenes that reveal the details of Daniel’s past, though unnecessary, are easily the film’s finest moments. Scorsese attains an almost religious intensity through vast yet formally understated shots of the tragedy revealed.
That the audience had guessed the details of the atrocity matters less than the tension between the film’s aesthetic formalism, cliche-ridden content and the hollowness of its themes, which are pointlessly – and painfully – articulated by DiCaprio in the closing scenes.
Recommendation depends on the viewer’s tolerance for tediousness and unwarranted emotional demands, though thriller obsessives and Scorsese fans will likely find a few moments of grace within the 137 running time.
More from VoiceMore posts in Voice »