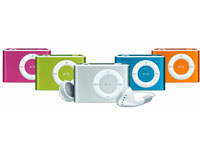 A listen into the iPods of our staff

We think it’s time you got to know us at the Scout, and you can tell a lot about a person from their iPod selections. When these staffers hit “shuffle,” these songs come out. Music (and quite a bit of caffeine) gets us through those long nights putting the paper together.
Alex Bahler
Voice Editor
Redman – “Cosmic Slop”
One of Red’s many nods to funk legend George Clinton’s band Parliament – or is it Funkadelic? Flow, witty lyrics, energy … the man’s got it all.
Tuatara – “25th and 6th”
Alternative rock dudes make evocative jazz in this side-project. Great interplay between the bass and saxophone here. Not big on jazz but this is phenomenal.
Beck – “Brother”
It’s on the “Odelay” reissue. I just pee myself over rare stuff like this. A preview of the weary folk to come on his future albums.
Queen – “Calling All Girls”
Freddy Mercury goes to the clubs, and it’s a cool stylistic shift. I like the funky, staccato rhythm and the weird, scratchy effects midway through.
Robyn Hitchcock and the Venus 3 – “Sally Was A Legend (live)”
All I can say is there are few sounds more wonderful than a ringing Rickenbacker in guitarist Peter Buck’s hands. The studio version can’t compare.
Black Flag – “You’re Not Evil”
Shaking things up now, I’ve always had a fetish for undiluted punk and hardcore. This band rebelled against rebellion, and left a few thousand broken eardrums behind.
DeVotchka – “You Love Me”
Was this recorded in a Portugese villa? DeVotchka’s sound makes me feel far more cultured than I actually am.
Steve Wynn – “A Dazzling Display”
I love the echo of those drums. Has a typical “1980s” sound although released in ’92. To me, this is an ironic embrace of hollow-headed yuppie culture.
Megan Loos
Photo Editor
Taking Back Sunday – “You’re So Last Summer”
This song brings me back to sophomore year of high school when this CD was new. It’s a good song for a breakup or a huge fight two people have.
Tally Hall – “Haiku”
It’s about a guy trying to sing to a girl and it sounds like he’s really nervous. You can relate.
Get Set Go – “The Trouble With Being Poor”
It’s about someone being poor, and I think lots of college students can relate to it. The narrator can’t even afford to have a girlfriend.
Bright Eyes – “Lover I Don’t Have To Love”
It’s a real old-school Bright Eyes song that’s very emo, but the melody and lyrics are both really catchy. It talks about the frustration with having a relationship.
The Postal Service – “Brand New Colony”
I think it’s about starting a new beginning. It’s extremely peppy and upbeat.
Naast – “Mauvais Garcon”
I know it’s unusual to have non-English songs on the iPod, but even though it’s in French, it has a very good rock/pop beat.
Nelly Furtado – “Give It To Me”
It’s a good mood-lifter. Justin Timberlake’s part at the end I especially like, because he gives a big middle finger to everyone.
The Who – “Baba O’Reily”
A good, classic song that was really popular my senior year. Even though it’s old, it’s a song I think everyone could enjoy listening to.
Ryan Hoevenaar
Layout Editor
Jack’s Mannequin – “Holiday From Real”
It’s the first song on the album, and it gets you pumped up for what’s to come. It’s an attention-getter.
Matchbook Romance – “Monsters”
This song’s on “Guitar Hero,” so that got me listening to this band. It’s lame to say you heard of a band on “Guitar Hero,” but whatever.
My Chemical Romance – “Dead”
I really like the guitar in this one, and I love how it’s upbeat even though it talks about something that’s really macabre.
Something Corporate – “Straw Dog” (live in London)
This live version adds extra stuff and gets the audience involved. It always adds a different tone to the band’s songs when they play live.
Ben Folds Five – “Brick”
I always get a kick out of girls thinking it’s two people who want to be together but get pulled apart … when it’s really about abortion.
Cinematic Sunrise – “Taking A Piano From The Pond”
I randomly found that album and, like the opening song from Jack’s, the song gets you pumped for the rest of the disc.
Pink Floyd – “Comfortably Numb”
I used to be really, really into Pink Floyd quite a bit, so of course it’s on there. One of the best-known songs from the band.
All-Time Low – “Dear Maria, Count Me In”
I got the Warped Tour ’08 CD at Wal-Mart for five bucks. This one’s really catchy, and I immediately checked out the band’s other stuff.
Lisa Fitch
Assistant Voice Editor
Warren Zevon – “Lawyers, Guns and Money”
To quote Zevon, he was the original excitable boy and just a talent that died too soon.
Frankie Goes To Hollywood – “Welcome To The Pleasuredome”
It’s a great experimental song. Dance music at its finest, in my opinion – the only people who really compare to them today are Scissor Sisters.
Procol Harum – “Quite Rightly So”
Really underappreciated, the band was right up there with Pink Floyd and the other progressive rock bands. Procol Harum did the first rock opus before The Who even did it.
Thomas Dolby – “Keys To Her Ferrari”
He’s better known as a producer, but he’s so tongue-in-cheek you can’t help but listen to him.
Rickie Lee Jones – “Danny’s All-Star Joint”
Just a local Chicago girl who’s been in the scene a long time, making some of the best blues and jazz out there.
10cc – “I Wanna Rule The World”
Just in general, 10cc brought art rock to the masses. Enough said.
Al di Meola and John McLachlan – “Mediterranean Sundance”
Complete guitar virtuosos. Satriani and Buckethead are complete amateurs compared to these guys, which is saying something.
Jay Leonhart – “Look Down Off A Bridge”
Leonhart’s more daring in the jazz genre than other people, much darker and taking a sardonic look on life.
More from VoiceMore posts in Voice »