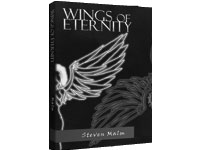 Most college students are too busy to even read a book.
It takes a certain kind of student to actually write and publish a nearly 300-page novel.
“I just love to write,” said Steven Malm, a junior psychology major and author of the newly published novel, “Wings of Eternity.” “I’ve loved to write since the beginning of high school.”
“Wings of Eternity” follows Heather Lotte, an angel trying to find a normal place in the world, despite having a variety of supernatural powers. As she tries to fade into living a normal life, forces from her past attempt to make her surrender to her fate.
“It’s the perfect mix of fantasy, romance and science fiction,” Malm said.
Malm came up with the idea for “Wings of Eternity” after drawing sketches of the characters.
Soon, there were character profiles to accompany the drawings and the story came from there.
While Heather’s story is sure to excite, the book’s conception proves to be just as intriguing.
Malm started “Wings of Eternity” as a senior in high school and finished the book by the end of his freshman year at Bradley.
“There would be months at a time where I wouldn’t write anything,” Malm said.  “Then I would write in bursts.”
After the novel was finished, there was still considerable work to be done.  Malm needed to find a publisher for “Wings of Eternity.” He found Xlibris, a Web site that assists authors with self-publishing. Even with a publisher, the newly finished novel needed a lot of work.
“The thing that took the longest was going through the book,” Malm said. “It’s entirely self-edited.”
Even though the work on “Wings of Eternity” has long been finished, Malm is working on new projects. However, there may be a follow-up to his first work.
“Right now, I’m working on some other ideas I had while working on ‘Wings of Eternity,’ ” Malm said. “But I may eventually go back and do something with a character [from ‘Wings of Eternity’].”
“Wings of Eternity” is  available for purchase at www.xlibris.com/wingsofeternity.
More from VoiceMore posts in Voice »