The Flaming Lips Reveal their “Dark Side” 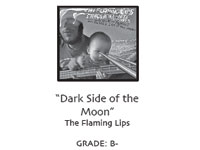 When The Flaming Lips decide to cover other artists, you know you are in for some kind of bizarre treat.
The Flaming Lips fans can recall YouTube videos of lead singer Wayne Coyne shouting the lyrics to Black Sabbath’s “War Pigs” into a megaphone and crooning a haunting ballad version of Kylie Minogue’s “Can’t Get You Out of My Head.” But what exactly could any fan expect when The Flaming Lips announced an entire cover album?
In December, The Flaming Lips released a track-for-track remake for Pink Floyd’s “The Dark Side of The Moon.” They named it, “The Flaming Lips and Stardeath and White Dwarfs with Henry Rollins and Peaches Doing The Dark Side of the Moon”
I know what you want to do. Your initial instinct is probably to go crying blasphemy over even the idea of touching one of rock’s greatest albums. “Dark Side of the Moon” is the album that defined the studio concept album. It is the album that made Pink Floyd a staple in rock music and turned boring planetariums into psychedelic laser-light shows. Let’s not forget that even the cover art turned the color spectrum itself into a world-wide icon.
Who are The Flaming Lips to even attempt this feat?
Indie/Space-Rockers The Flaming Lips are not alone in their quest for the cover album, as their overlong title suggests.
They enlisted the likes of Henry Rollins, Peaches and Coyne’s nephew’s band, Stardeath and White Dwarfs. Rollins handles spoken-word parts of the album in a suiting monotone voice, while Peaches wails in the background on a few tracks. The album overall places a heavier emphasis on the ambient background, while Coyne’s characteristic airy vocals sputter in and out of tracks like “Breathe.”
Regardless how you feel about remaking an album that sold more than 45 million copies to date, the Flaming Lips did so fearlessly with their own style.
The Lips are experts at creating those operatic and atmospheric layers that are required for “Dark Side of the Moon,” and the whole album is overall entrenched with more funk and attitude than the original. Overdriven guitars and distortion reign supreme on most of the tracks, and whammy effects are used on many for that extra funk sensibility.
Many tracks, however, fall into the category of “Big Disappointment” or “Huh?” For example, “Money” is probably the most recognizable single off of the original, featuring looping cash registers, arguably the most intense sax and guitar solo of the album, and soaring vocals from David Gilmour.
The Flaming Lips version has no sound effects loop (Come on guys! That part was easy!). It has no solos at all, and instead of singing the unbelievably catchy tune, Coyne robotically recites the song’s lyrics with a disturbingly metallic effect. This song in particular is a huge disappointment and reminder how the album as a whole still pales in comparison to the original.
You can appreciate a band that isn’t too afraid to tackle an almost canonical album while maintaining their characteristic sound. The album’s conception still comes off almost as a dare – as if enigmatic Coyne himself was just trying to do the next “weird” thing. No word yet if the album synchs up with the “Wizard of Oz” or any other movie.
Lips fans will probably love it, but Pink Floyd purists will probably still go burning the album in heretical glee.
More from VoiceMore posts in Voice »