The Format, Anathallo & Steel Train collaborate for a little fun 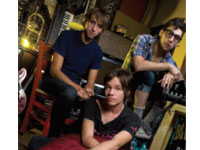 Fun: Something that provides mirth and amusement.
When we devoured Nate Ruess’ (former member of The Format) new band with our ears, we easily saw why Ruess decided to name his band fun.
For those of you not aware of the band, The Format , it’s an indie – rock band formed in 2001 that is definitely worth a listen if your heart holds true to indie music.
Unfortunately, The Format announced its hiatus in February 2008. When asked about the band’s return, Ruess simply said “Every one of us likes to remain optimistic and hopeful that it one day could happen.”
Well, it didn’t happen, but we were not disappointed at the aftermath either.
On Aug. 11, 2008, Ruess posted a letter to all of his devoted fans on The Format’s MySpace blog. It announced his return to the stage, but not as a band member of The Format. He said he would play alongside Jack Antonoff of Steel Train and Andrew Dost, a former member of Anathallo, in a band called fun.
“The day after The Format had broken up, I already knew that I couldn’t just call it quits. I wasn’t ready to give up music,” Ruess wrote in his letter. So instead of leaving music behind forever, he did the unthinkable and made a band with two of indie music’s most prominent names.
Antonoff pretty much reinvented Steel Train into the success it is today, and while Anathallo is not as well known as either Steel Train or The Format, it is without a doubt that Dost is one of the most talented musicians in today’s indie music scene.
fun. produces a style of music that sets itself apart from other bands we have discovered in the past. Antonoff’s guitar chops add a whiff of that Steel Train sound (which we can’t complain about), while our knowledge of Dost’s talent at the many instruments he has mastered makes it crystal clear why all these noises coming from our radio sound oh so good.
When Ruess adds some song ideas and his angelic patented voice, which in the past has made us sing out loud about his “Dog Problems,” everything comes together to give fun. a distinct resonance that only this trio would be able to conjure.
Overall, fun. is a band that music-hungry individuals should listen to if they haven’t heard them already.
If anyone knows of fun.’s addicting sound, it’s the Activities Council’s Music Live Coordinator Natalee Runyan. ACBU is bringing fun. to campus at 8 p.m. Saturday at the Michel Student Center with opening act The Miniature Tigers. The concert was originally set to be outside on Olin Quad, but ACBU coordinators said the chance for rain is high this weekend.
“We’re really excited to have fun. play on our campus,” Runyan said. “We hope people are too because this is the best band we’ve had in a long time.”
Runyan said ACBU chose fun. to play a set Saturday because of the band’s originality and amazing talent.
“They’re great. There isn’t a bad song on the album at all,” she said. “We’re very lucky to have caught them on their first headlining tour.”
More from VoiceMore posts in Voice »