The KFC Double Down: a trip through delicious, delicious Shame 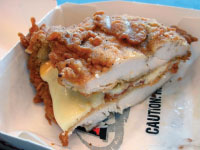 I hate sounding like Jay Leno, but how about that Double Down Sandwich?
In case you have been living in a pop-culture/fast-food bereft cave, Kentucky Fried Chicken has just unleashed its newest piece of fast food snuff in the form of the Double Down Sandwich, a horrifying combination of bacon, pepper-jack and Swiss cheese and a sort of chipotle mayonnaise all between two deep fried chicken filets.
Yep, the filets are the bread.
You’ve probably heard this before. You’ve probably made jokes about it before and stated your intent to eat one or to vomit shortly after consuming it.
I subscribed to the latter camp. I have a pretty weak stomach for grease, can have crippling heartburn and a tendency to get nauseous when eating things I know are terrible for me.
That being said, I am willing to consume one for you, the public. However, I also didn’t want to eat one alone in the Scout office, so I recruited the honorable Bill Hopkins and Erin Henneberger to eat one with me.
There are two things to note immediately when grappling with your first Double Down. First, it’s really hot. I almost had to put it down a couple of times, despite the paper covering the greasy sandwich.
The second thing is that the Double Down is the ugliest slab of meat and goo you will ever encounter. The cheese and sauce poke out from between the chicken-like snot, and it only gets grosser as the sandwich nestles itself in the bottom of the wrapper. Clearly, the paper is used mostly to obscure the sandwich.
But the thing is, the Double Down is fantastic.
As far as fast food slop goes, the Double Down is expectedly good. I mean, c’mon, it’s two pieces of KFC chicken and bacon. The Colonel is a mad scientist of poultry deliciousness. Toss on bacon and chipotle spread, and you have something that is hard to beat.
The biggest problem is the cheese. It’s unbelievably unappetizing and somewhere in between public school and prison quality. The flavor doesn’t really come through, so it mostly just ends up being there to give some weird gross smoothness to the mostly crunchy sandwich.
Eating the Double Down is a mix of mouth coating grease and shame. You know you shouldn’t like it. You know you shouldn’t be eating it. You know you shouldn’t want to eat another one.
And to KFC’s credit, you want to do all of these things. It’s tasty. It’s satisfying. It’s exactly what you want, satisfying every debased animalistic urge you have and leaving only a shameful 10-pound brick in your stomach.
More from VoiceMore posts in Voice »