The Morning Benders embrace the north west on sophomore effort 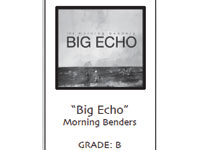 The Morning Benders’ sophomore record, the panoramically evocative “Big Echo,” is a work of atmospheric grandeur.
The ethereal harmonies of “Stitches” and the title track have more in common with the expansive reverb of fellow Pacific Northwesterners Fleet Foxes than those of The Beach Boys or The Byrds, bands often referenced in reviews of The Morning Benders’ first album “Talking Through a Tin Can.”
“Excuses” melodically recalls the airy “In an Aeroplane Over the Sea.” Like the Neutral Milk Hotel classic, “Big Echo’s” opener applies a surrealist sensibility to lyrics that mingle sex and death. (“You tripped to taste me/And I taped my tongue to the Southern tip of your body/Our bones are too heavy to come up/Squished in a single cell of wood.”)
Though “Excuses” would sound appropriate on a vintage phonograph, it comes bathed in the coral fluidity of a Roy Orbison arrangement, and the unexpected marimba breakdown and wash of wordless doo-wop vocals that close the song reveal The Morning Benders’ new experimental inclinations.
While “Talking Through a Tin Can” was more firmly rooted in efficient updates of ‘60s California pop, “Big Echo” finds the group exploring lush expanses akin to Grizzly Bear.
The fact that “Big Echo” is more physically similar to “Veckatimest” than anything by The Shins – the band The Morning Benders is most often equated with – hardly comes as a surprise, considering guitarist/singer Christopher Chu co-produced the album with Grizzly Bear bassist/producer Christopher Taylor.
Like Taylor’s band’s most recent effort, “Big Echo” wafts between luminescent pop and drifting ambience. The punchy, wistful “Promises” and jaunty “Cold War” will be the most pleasing to fans of the first record who came back for more Shins inspired-fare. However, despite the unmistakable similarities between the yelps of James Mercer and Chu, the comparison that haunted “Talking Through a Tin Can” becomes less applicable as the album becomes increasingly bleary and meandering.
Though “Big Echo” peaks early with “Excuses,” this isn’t so much evidence of the band’s weaknesses as a consequence of their new interest in mood and detail.
The phosphorescent summer haze of “Wet Cement” continues the album long fascination with watery textures while plinking, percussive layers rain over the unhurried, dreamy fog of “Pleasure Sighs.” The song eventually erupts into a startling blend of thunderous guitars that are softened by the resounding, diaphanous production.
Cloudy dissonance permeates the remainder of “Big Echo,” though the tone never fluctuates above moodiness into aggression.The tempo briefly accelerates on the catchy “All Day Day Light,” but lyrically and sonically the emphasis is simultaneously on the oceanic and the myopic as picked guitars, sounding almost like notes from a harpsichord, are sprinkled on the spacious, multi-hued ambience of the track.
Like most of “Big Echo,” the song summons the swimming pastels of the album art while maintaining a well-mannered precision, reinforcing their similarities to Grizzly Bear while allowing them to make an adventurous leap out of the confines
More from VoiceMore posts in Voice »