The Nickelodeon Generation: A look back at vintage television 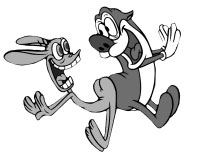 I have seen approximately 2,000 episodes of “Saved by the Bell.”
I think I could remember more stories about the gang at Bayside High than I could about my own high school experiences. I remember watching “Saved by the Bell” when I was little, thinking that I might have a chance to find oil under the football field, or drive around in the principal’s car. Naturally, these dreams died, but “Saved by the Bell” still sticks as a valid form of entertainment to this day.
Although it belonged to the highly respected and beloved genre of golden-age ’90s television, shows like “Saved by the Bell” have all but disappeared from television.
What follows are just a few examples of the canceled gems that gave a reason to wake up early (or stay up late) on Saturdays in the middle of the ’90s.
“Boy Meets World” was ABC’s twin of NBC’s “Saved by the Bell” and will eternally be debated over its deserved merits.
Following the lives of Cory, Shawn and the mysteriously-named Topanga, “Boy Meets World” spanned the world of after-school specials and by late in its run had become a full-blown sitcom.
Although no other show has really been able to make this shift as smoothly as “Boy Meets World,” there is no way that it could ever compete with the likes of AC Slater and Zach Morris.
As dramatic as the lives are of those three friends from Philadelphia, it would be hard to describe them as horrifying.
That would be where “Are You Afraid of the Dark?” steps in.
Blending the morality play of  “The Twilight Zone” with the urban legends of shows like “Supernatural,” “Are You Afraid of the Dark” was a trademark of Saturday night Nickelodeon in the mid to late ’90s. Its episodic format gave cameos to some stars television and movie viewers may know today like Ryan Gosling, Melissa Joan Hart and Hayden Christensen.
Before Comedy Central debuted “South Park,” Nickelodeon controlled the world of subversive cartoon humor.
First was “The Ren and Stimpy Show,” a throwback to the golden age of cartoons.  The show was notorious for its use of violence and somewhat obscene imagery, but it also commonly used scatological humor.
Episodes such as “Stimpy’s First Fart” and “Rubber Nipple Salesman” quickly drew the ire of parental watch groups.
“The Ren and Stimpy Show” has led many other cartoons of the era to follow in its subversive glory, such as “Rocko’s Modern Life” and “Beavis and Butt-head.”
For ages 8 to13, “Legends of the Hidden Temple” was “Jeopardy.”
It would be hard to find a single child in America who did not fantasize about being a part of one of the color/animal themed teams and racing through the temple to win the grand prize. Instead, most everyone had to watch as some schmuck was once again unable to put together the statue in the Shrine of the Silver Monkey.
Of course, there was also “Double Dare,” perhaps the most famous vintage Nickelodeon game show.
“Double Dare” was hosted by Marc Summers, who now has an illustrious career on the Food Network.
The show featured large bodies of disgusting substances and a variety of physical challenges.  The most memorable thing from the show was the prevalence of green slime, usually filling kiddy pools or being dumped onto large groups of contestants.
In an age filled with rampant ecological and environmental problems, today’s youth are missing out on an education from the only scientist that ever really mattered, Bill Nye.
“Bill Nye the Science Guy” remained a staple on PBS as well as a VHS for almost every middle school science teacher throughout the ’90s, primarily for its ability to be both informative and highly entertaining.
Mixed in with facts about El Nino and volcanoes were fake commercials for sporks as well as random explosions.
“Bill Nye’s” use of irreverent humor mixed with valid science and interesting facts has been imitated countless times and is sure to be an influence on many shows in the future.
Everyone looks back with sugar-coated nostalgia on the pop culture of the past, but in some cases, the golden age of television is firmly in the past.
Although many of the shows are available on DVD, the thrill of sitting down in front of the TV and eating Fruit Loops out of the box can never be resurrected.
Instead, people will have to continue to depend on the syndicated masterpieces on TBS to see kids with talking robots, and their fill of high school shenanigans.
More from VoiceMore posts in Voice »