The Scout Olympics: The Results 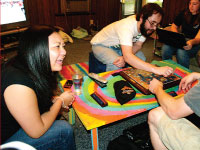 Before Scout Olympics started, there were many questions pondered in anticipation of the event. Could Scout Olympics live up to the hype from the preview? Would we really make it through the day? Do I stand a future as a Las Vegas odds-maker?
The answers are definitely yes, surprisingly yes and never.
Though my predictions were the worst ideas since Miley Cyrus tried to become a serious actress, the day was still a success.
To figure out how it worked, the scoring system was simple, with first place earning three points, second earning two, third earning one and fourth earning zero.
Mini-golf
The first event of the day also seemed to be the most draining. By the time the second hole started, clubs had already been chucked to the ground and death threats had been spewed.
While Vang upheld my predictions for the first few holes, even with a glimmer of hope at the end, she ended up losing to Adams, with Hopkins holding a lofty eight-stroke lead for the victory. Oldendorf could have set a new course high with at least a 90, hitting par for the course after the first nine holes.
“Scrabble”
After exhausting a lot of physical activity during the first event, the competitors decided it was time to slow things down and exert a little brain power instead.
Vang dominated the words, and though Adams was poised to upset her, she proved too experienced at the game. Hopkins was the surprise of the day, having a much larger vocabulary than sportswriters get credit for, using words like “lament.” Oldendorf, too tired from mini-golf, failed miserably.
HORSE
A much more competitive game than anyone foresaw, each competitor stepped up their physical skills and entered a full-on aggressive mode.
Hopkins pulled out some high-skill shots, which proved to almost be his downfall. Oldendorf couldn’t keep up with the far shots and eventually became the first one out. Vang held on much longer than expected until Adams bested her with his sneaky shots.
It came down to the wire between Adams and Hopkins, with both of them at H-O-R-S, but Hopkins won with his signature shot from behind the backboard. After the event, Vang said, “That was the worst experience of my entire life.”
Badminton
The quickest event of the day, Badminton was the least-threatening, most laid-back game, somehow even more than “Scrabble.” In the opening round, Oldendorf beat Adams, securing his first points of the day, and Hopkins beat Vang. The fight for third place was a close one, with Vang besting Adams. In the gold-medal match, Hopkins earned the win with Oldendorf taking second.
“Scene-It”
Though no pieces were thrown, “Scene-It” proved to be a competitive event. Adams easily dominated the event, and Oldendorf took a surprise second. As Vang and Hopkins battled for the third place points, the slew of old movie questions that Hopkins received eventually crushed him, and Vang took third.
“Trivial Pursuit”
Once it was time to play “Trivial Pursuit,” all competitors were weak, drained and done with consuming more of their lives with tedious games.
“We’re going to play this game until we die,” Adams said. After eight hours of games, 45 minutes of Trivial Pursuit was enough. With three pieces of the pie, Adams came up with the win.
The Results
After Trivial Pursuit, Vang and Oldendorf had secured their finishes at third and fourth, respectively. Hopkins and Adams, however, were tied, prompting the judges, myself, head copy editor Jessica Lampe and photo editor Megan Loos to create a last-minute tiebreaker.
As this was an Olympics for journalists, the event was an AP style quiz. The race started out a close one, but Hopkins missed a couple questions, as Adams stayed perfect.
In the end, Adams took the victory, even though Hopkins won more events. While Adams was the definite winner, this could become the most contested Olympic Games since the ice skating debacle of 2006.
Count
“That’s what she said” jokes: 14
Death threats: 8
Air balls shot: 11
Clubs thrown: 3
Rackets thrown: 3
Final Standings
Jackson Adams- 13
Bill Hopkins- 12
Annabelle Vang- 9
Pat Oldendorf- 5
More from VoiceMore posts in Voice »